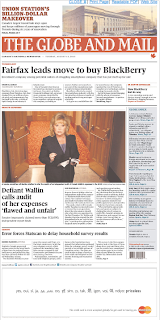 When the fall rolls around, Prince Rupert residents will have one less option available, when it comes to a leisurely read of a national newspaper.

The Globe and Mail announced on Monday that it will cease delivering print versions of its publication to Newfoundland and Labrador, as well as to parts of British Columbia, with Prince Rupert and Prince George among the communities to soon come off the distribution list.

Calling the delivery to the far corners of the nation a significant cost inefficiency, (it's reported that they lost 1.5 million dollars with their extended delivery route) the Globe and Mail will discontinue the delivery schedule on October 1st.

Those with subscriptions will be offered a discounted access to the Globe and Mail's Internet services Globe Unlimited and Globe2Go.

An estimated 3,000 customers will be affected by the change.

Not said in the news release is if the newspaper will still be available at local news stands, however, when the National Post made a similar announcement a few years back, the delivery of print copies to local stores came to an end as well.

It marks another shift in the print journalism industry, which has seen many newspapers cease publication over the last few years, some of which had been civic institutions for many decades.

Those papers that continue to publish have offered buyouts to staff, cut costs and migrated towards a pay wall system (The Toronto Star introduced that system today), all in a bid to reverse the flow of red ink that has marked much of the decade for the industry.

Of note, and indicative of the shifting methods of information delivery, the news was delivered by way of twitter.

It was later picked up by online publication The Huffington Post , which outlined the changes ahead. The Tyee also provides some background on the pending change in local news options.

Email ThisBlogThis!Share to TwitterShare to FacebookShare to Pinterest
Labels: Globe and Mail to end print delivery to Prince Rupert