Engines roared and the jets soared as the Royal Canadian Airforce Demonstration Squadron the Snowbirds, brought their high flying aeronautics to the skies over Prince Rupert on Wednesday afternoon.

Prince Rupert residents and visitors to the city picked out their favourite vantage point, locations that stretched from Cow Bay's Atlin Terminal to high ground by the Highliner Inn, as well as the prime vantage spots of the Rotary Waterfront Park, Mariner's Park and the upper level of the Rupert Square Mall. 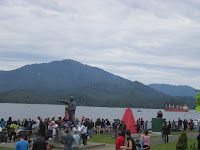 Each location featuring enthusiastic audiences, watching in admiration, as the planes were put through their paces, breaking in all directions only to turn sharply and pass close to the audience up and down the downtown core.

A good number of those watching the show took advantage of local waterfront establishments, choosing to sit with a beverage to enjoy the forty minute program that was packed full of the rolls, dives and streaks across the skies, many of the moves that have made the Snowbirds one of the favourites of the air show circuit over the years.

Unlike last year, Wednesday's show would not be denied to residents and visitors, as Mother Nature accommodated all, while providing for a cloudy, but warm day and most importantly, holding off on the rain that had been forecast for the day.

Last year, Rupertites were not so lucky, as the inclement weather and low cloud forced cancellation of the show, so this year was a doubly rewarding event, as the Snowbirds anxious to provide a show to remember went through their various manoeuvres.

The show began as promised at 4 PM and for forty minutes the audience scanned the skies high and low, as the planes swooped down over the harbour, surely one of the more spectacular of backdrops for the famed Canadian squadron to perform in front of.

The forty minutes seemed done almost as soon as they had started, the Snowbirds making one last pass through the harbour before departing for their Digby Island Airport staging site.

For those that made the trek downtown and judging by the traffic flow post show, there were many, the afternoon was as advertised, offering up the opportunity to take in the best that the Air Force has to offer an audience, showcasing the skill required to make the jets come alive across the harbour sky.

The years between trips to smaller cities seems to grow by the year, such are the demands on the Snowbirds schedule, so for those that enjoyed Wednesday's show, it may be a few years down the line before the team returns.

Making the large number of video collections made from the afternoon, an archive of sorts for the 2013 Prince Rupert stop.

From our vantage point at Mariner's Park a few more shots of Wednesday's show for the scrapbook. 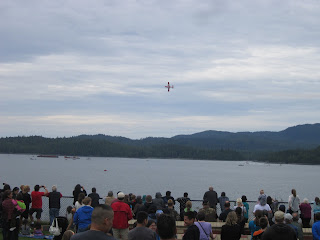 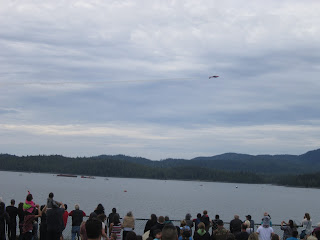 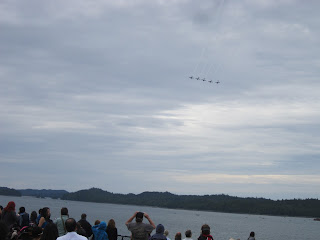 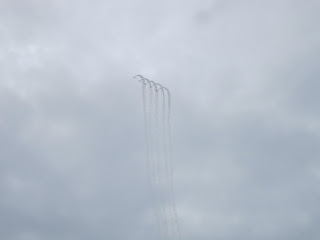