For North Coast MLA Jennifer Rice, the months of June through to September have been the thing of a fairly low profile on the issues front. The photo feed of her twitter account, highlighting a BBQ here, a trip to Haida Gwaii there, a canoe journey on the Central coast, all part of her summer schedule since the Legislature last sat in session in May.

All good for networking we imagine, but all in all, for the most part of the summer, the NDP MLA has provided for little in the way of weighty consultation with her constituents.

Particularly with those living in the most populated portion of the riding, that of Prince Rupert/Port Edward.

Now while everyone needs a little down time in the summer, when it comes to any number of issues to be addressed for the region, knowing where Ms. Rice stands most of the time, is a bit of a guessing game for the most part.

Never more so than with the current dispute between the BCTF and the Provincial Government.

While she's been busy on her twitter account, providing for the occasional photo op or two on the line in Kamloops. When it comes to some comprehensive thoughts or even suggestions on how to solve the current impasse, she's apparently keeping them to herself. 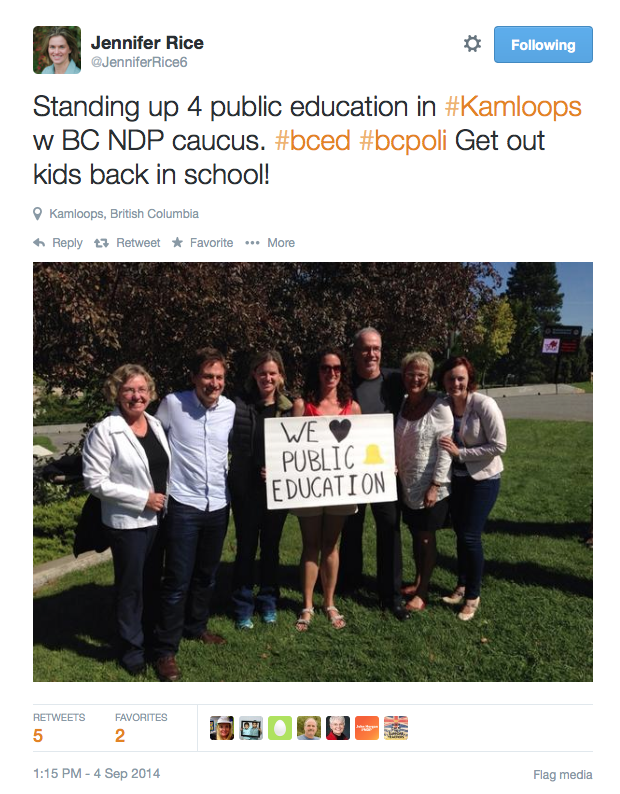 Near as we can determine, other than a few posts to her Facebook page,  the only comments made thus far when it comes to the teacher's strike came as part of a short observation in late August for the Haida Gwaii Observer. Where she outlined how she had been "off the grid" so hadn't been thoroughly briefed and updated on the discussions.

We imagine that by now she's been "updated" on the theme of the dispute.

So, with parents across the North Coast looking for some guidance from the politicians of British Columbia as to how the schools can find their way to re-opening. Perhaps a few public comments from the local MLA, addressed to those living in the riding might be timely so as to give us all a better understanding of what she believes needs to be done to get the situation resolved.

And while her Facebook commentary suggests that she echoes much of the NDP line regarding the dispute. It would no doubt be welcome by members of both the PRDTA, as well as for those serving on the SD52 Board to have the MLA become more engaged in the issue on the local level.

Beyond the immediate concern of most on education, there are a few other items for the North Coast that could also require some community engagement as well.

With some eight LNG proposals now reported under consideration for the Prince Rupert region, we still haven't heard any comprehensive review from Ms. Rice, as to her thoughts on the scale of development being considered for the region.

Likewise, with the City of Prince Rupert frequently suggesting that the pressure on community infrastructure could be immense with such scale of development, the North Coast MLA has yet to seek out some background from the community as to what assistance is needed to provide some relief on those pressure points.

As the summer break for MLA's began way back in May, we offered up a thought that a community meeting might be useful for the MLA to learn more about what her constituents are thinking and to gain some background on key issues for the riding. 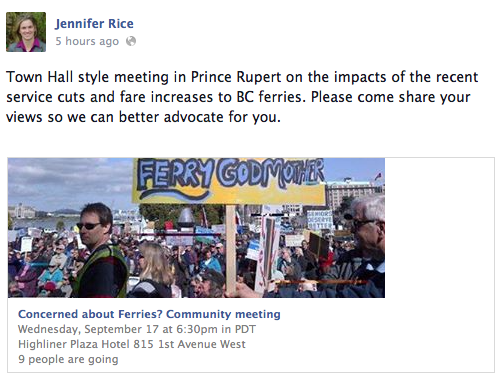 So it's with interest to note that Ms. Rice is seemingly ready, to a fashion, to offer up that opportunity for residents of Prince Rupert, .

A note that appeared Sunday afternoon on a Facebook page dedicated to BC Ferries issues outlines the nature of a Community meeting, planned for Wednesday September 17th from 6:30-to 8:30 PM at the Highliner Plaza Hotel.

Along with Ms. Rice for the community meeting will be NDP opposition critic for BC Ferries, Claire Trevena.

The original theme of the session is to discuss how BC Ferry Service Cuts and increased ferry rates have impacted on local residents.

However, once you're in the door, one would imagine that any question, or observation on any topic, might be a welcome addition to the discussion and provide some guidance for the MLA to take back to Victoria.

The session, marks the first major opportunity to share concerns with Ms. Rice in such a forum that we can remember, a welcome thing for engagement with the riding.

To observe on the theme from her summer, it's good to see that she's back on the grid.

For some of our past items of interest on the work of MLA Rice in Victoria see our archive page.