B. C. government's hopes for Prince Rupert elements in Ocean Protection Plan, seemingly left on the shelf after roll out 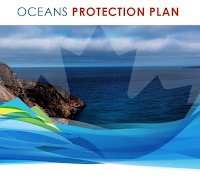 There are some interesting side notes that seem to be coming out related to the Monday announcement on the Federal Government's Ocean Protection Plan.

With two key elements that would have been significant for Prince Rupert, apparently something which did not make the final list of funding initiatives related to the federal announcement.

Victoria Times Colonist columnist Les Leyne notes in his work today, that the British Columbia government had two major items for Prince Rupert on their wish list, when it comes to what is needed as part of any comprehensive approach to coastal response.

The first was a look at the BC Government's desire for a new Coast Guard base for Prince Rupert which was listed by Leyne as one issue that didn't seem to get much traction with the Federal Government.

Another theme of note was directed as to how the BC Government believes attention is required in the area of a major upgrade of health-care delivery services for both Kitimat and Prince Rupert.

Included in that overview was the need for 12 million dollar hospital heliport, a desire which Leyne notes was a "shot in the dark and it's not going anywhere."

Leyne also observes that the British Columbia government was looking for three new salvage tugs to be located in the province, two in the south, one for the north.

On Monday, the Federal government did confirm that they will be providing for such types of vessels, leasing the tugs that are capable of towing commercial vessels and container ships.

However, there was no confirmation as to which British Columbia port salvage tugs would be based out of, or what kind of timeline on delivery is in place.

The full overview of the unofficial checklist that Les Leyne compiled can be reviewed here.


Much of the Federal plan from Monday outlined initiatives for Port Hardy and the Central Coast, with a new marine resource centre to be established in the Vancouver Island town, while First Nation communities along the coast will also see a number of marine response initiatives established as part of the federal response plans.

It made for a puzzling oversight, considering the volume of vessel traffic that currently flows through the Port and with expectations that those levels will increase in the future, something which will surely provide for many challenges for response.

The two key areas outlined in the Times Colonist report, those of the need for better resources for the Prince Rupert Coast Guard base and a desire for expanded medical services for the region, might provide some helpful background for Skeena-Bulkley Valley MP Nathan Cullen to bring to the House of Commons.

Making the lack of attention and delivery of resources to Prince Rupert part of any comments Mr. Cullen may raise related to the Ocean Protection Plan.

While it's a welcome thing to see the Federal Government take measures when it comes to protecting the west coast, any comprehensive approach to marine response planning surely should feature some kind of nod towards the strategic importance of Prince Rupert and the port facilities in the area.

Both the Provincial government and our Federal MP should make sure that the North Coast's interests are heard by the Federal government and that any serious initiatives on marine protection make Prince Rupert a key element of that response.