If City Council wants to discuss Islands ... it may be a timely moment for an update for one named Watson 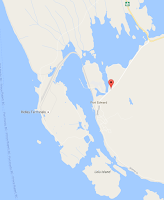 As we noted yesterday on the blog, City Council has directed a fair bit of attention this year towards issues related to Lelu Island and Pacific NorthWest LNG's plans for a plant and terminal at that location.

An ongoing theme which as was noted by many around the City Council Chamber on Monday, features a location which is found in another community and for the most part beyond the scope of what the City can control.

And while the issue of how the City approaches negotiations towards the development and its impact on Prince Rupert is important, at the end of the day, that island is one that is far from the reach of any civic oversight.

However, if council wants to hop a bit to the north, there is another island, one not too far away from Lelu that the city does have a long running attachment with and remains a topic that still makes for a fair bit of interest to the residents and taxpayers living in Prince Rupert.

We speak of course to the never ending story of Watson Island.

We haven't heard much about Watson in 2016. A check of our Council report archives to this point, finds no statements from the Mayor and no contributions by Council members inquiring as to how things may be progressing at Watson Island and what its future may hold.

Updates, if they are given, perhaps are among the talking points for some of the closed sessions ( now number 16 and counting ) that remain as popular as ever down on Third Avenue.

Still, something of interest in the public record from Monday's Council meeting caught our eye and it may suggest that perhaps it's time for the Council members to offer up a status update for the folks at home, to explain as to how things are going over at Watson.

Monday night City Council received a report from the Finance Department that outlined the September Variance review, a snap shot for council of the city's current financials compared to their budget projections.

Monday night's Agenda Report featured a look at the Airport Ferry and how it's revenue stream for 2016 is not expected to meet expectations by year's end. An interesting anecdote when it comes to the city's main transportation link and an area that makes up an important part of the city's budget.

That report however didn't seem to attract much notice from Council and solicited no comments, or questions for the CFO from the elected members.

However, a little further down the spreadsheets that were provided was something equally interesting and an item that might have also made for some conversation, had the council members been inclined to explore a bit.

With the Finance department providing some figures related to Watson Island and how those financial revenues and expenditures were looking  as of September.

From the review of September, on the revenue side of the information sheet, the Budget revenue projections for 2016 were listed as at 500,000 dollars, while the Actual Year to Date Revenue figure comes in at 22,660 dollars. 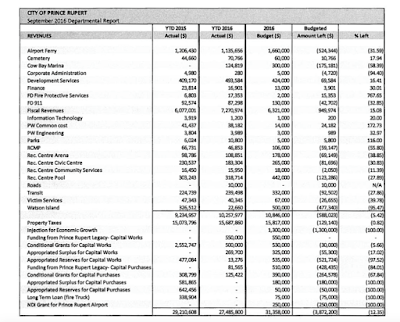 When it comes to the Expenditures Spreadsheet, the Watson Island budget figure was noted at 500,000 dollars, while the actual expenditures to date come to 715,399 dollars as of the September report. 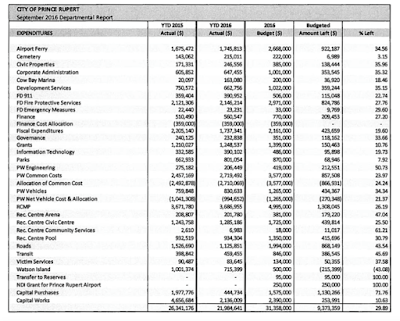 Those are some stark observations related to the Watson Island file and something that might have warranted a follow up question or two from some of the elected officials sitting around the Chamber on Monday night.

In previous years, prior to the current council being elected to office in 2014, then Mayor Mussallem would from time to time, settle into his Mayor's chair to share some thoughts on Watson. And while they weren't frequent and we're pretty sure that it was not one of his favourite topics, he did at least approach the issue as part of the public council meeting process.

The nature of those updates providing for some background on such things as burn rates from the industrial site, or delivering guarded updates on the legal proceedings that the city was engaged in at the time.

Considering that there's to this point been no declaration of peace in our time, and the most recent Statement of Financial information of June outlined legal expenses of 645,006 dollars for 2015, one can only guess that the legal efforts are still in motion to this day.

Some samples of those occasional fireside chats from the former Mayor can be found below:

Watson Island even featured into Mayor Mussallem's final address to Council in November of 2014, when he observed for the New Mayor and incoming Council members as to just what a "hell hole it can be".

We're not sure if the place is still a hell hole or not, but then again we're not sure about much of anything when it comes to Watson Island.

The topic doesn't appear to be a theme that the current Council believes is one that requires much in the way of public discussion in Council chambers, or for an update through the growing range of communication methods that the city now makes use of.

Watson Island has not been the thing of fancy info graphics, Facebook updates, You Tube video tutorials, feature advertorials in the local paper, or even of note for the occasional statement on the city's website.

The last mention of the place on that city communications portal being this statement from October of 2015 outlining the city's response to an Advertisement in the Northern View by a former mill owner with Sun Wave.

With Watson Island tucked away as it is just on the edge of the Port Edward border, the approach seems to be one of out of sight, out of the public's mind.

Still, Rupertites are curious folks as they should be, considering that they have a vested interest in how it all turns out. Some may still be wondering about such things as those burn rates and what kind of revenue is being generated (or not), as well as to hear some thoughts on how that legal situation is shaking out.

After so many years of promises that we're about to turn a corner, they also might what to know what plans, if any, are in the works for a rebirth of Watson Island as an industrial engine once again.

Council members have spent countless hours this year in discussion on Lelu Island and a range of other items and personal agendas that for many may not be considered part of the city's mandate.

Perhaps it's time that they put aside a bit of time for us and offer up a public review about where we are today when it comes the current status for Watson Island and what it's future may hold.

You can take a trip down memory lane when it comes to the tales of Watson Island through our archive pages here.

Email ThisBlogThis!Share to TwitterShare to FacebookShare to Pinterest
Labels: Time for an update on Watson Island