Herb Pond to launch second quest for the Legislature for B. C. Liberals

The bid was apparently launched at the Wheelhouse Brewing company earlier this month, though in the rather mysterious ways of the BC Liberals on the North Coast, no actual announcement was released to celebrate the stirrings of life for the usually quiet organization, with word of the candidates plans delivered through a Northern View article published eight days later.

Perhaps not a surprising thing, as at times, it appears that the Liberals on the provincial side on the North Coast are like members of the witness relocation program, hesitant to say much and rarely engaged in political issues on the local scene outside of the run up to provincial election campaigns.

However, now that the word is out, it does offer up the prospect of a fascinating campaign ahead. With Mr. Pond perhaps the best option that the BC Liberal Team will have to try and add the North Coast to their side of the Legislature chamber. 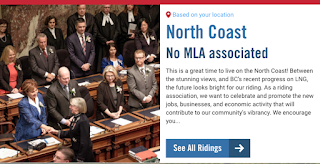 Mr. Pond of course offers the prospect of a high profile to the upcoming campaign for the BC Liberals, from his time as Mayor of the city, to his current work with Prince Rupert LNG and the BG Group's proposal on for the Northwest. Also of note are as his efforts with the Northwest Community College Board and the many community organizations and their work that he lends a hand towards through the year.

Should Mr. Pond become the nominee, he will be making his second attempt to become the North Coast MLA in the Legislature, having ran under the Liberal banner in 2009 and placing second to then incumbent Gary Coons.


In that campaign, Mr. Pond collected 3,110 votes in a three way race, roughly 35 percent of the vote compared to Mr. Coons vote totals of 5,097 or 58 percent , Lisa Girbav represented the Green Party during the 2009 election received 683 votes which was near 8 percent of the total vote.

A trip down memory lane from that campaign finds many of the same themes taking shape for the spring election campaign. Mr. Pond was stressing the talking points of jobs and opportunities for young people in 2009, something that remains on his mind now and is as valid today as it was back then.

In his interview with the Northern View, he offered his praise for the work of the current Prince Rupert Council and also pointed to the need for Prince Rupert to have an advocate in Victoria that can help to bring funding and other benefits from the province to the region.

The latter issue is something that could make for a pretty interesting campaign theme and one that will find a fair amount of traction in Prince Rupert as Pond looks to wrestle the riding away from the NDP incumbent Jennifer Rice.

So far there has been no indication from the BC Liberals as to when the North Coast will formally hold a nomination meeting, or announce who have put their names forward as candidates for the nomination.

But depending on who they eventually choose to send into the political battle, the Spring 2017 could very well make the North Coast yet another key riding to watch for observers of politics across the province.

With all of the speculation starting to bubble up in the political waters of the North Coast, we'll begin to track the pursuit of the May election with an archive page for your review.

You can find those entries here, anchored on our right hand column in our Extra Edition section.

Email ThisBlogThis!Share to TwitterShare to FacebookShare to Pinterest
Labels: Herb Pond tests the political waters for the 2017 campaign