Harbour Theatre returns to the days of the Rupert soaps 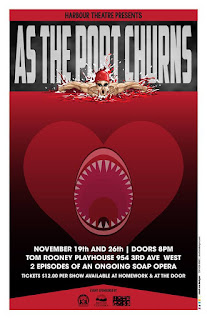 Many have noted through the years that living in Prince Rupert can at times be the thing of a soap opera, and over the course of many decades there truly has been much that has happened in the community to give life to that theme.

Such has been the narrative of the place that the city's theatrical community once gained quite a bit of attention for their Rupert Soap Operas, tales of hucksters and dreamers, curious characters and fanciful events, all delivered with a mischievous twist of the theatrical group's satirical the wit.

For fans of that entertaining style of theatre, those days are back, as Harbour Theatre returns to the genre that gained it great acclaim, presenting the ongoing Rupert drama of ...

"As the Port Churns" ... (cue the dramatic soap opera music)

This Rupert version of a telenovela takes us into the drama surrounding the arrival of Big Beer to the region and their plans to pipe some of their Mysterious elixir of Liquefied Naturfied Beer from Alberta to the North Coast.

A percolating event that is set in a community in the midst of an uproar and would seem to herald much in the way of meloddrama as only Prince Rupert could provide.

Spreading the word for As the Port Churns this week were David Smook and Lyle McNish the creative team that is behind the return of the Soap Opera genre to local theatre. They were making the media rounds to share some of the tidbits that will lure audiences to the Tom Rooney Playhouse on Saturday night for the opening act.

Lyle McNish shared some background for the Northern View's podcast (twelve minute mark) , revisiting some of the past of the soap opera theme in the community and providing a glimpse into some of the characters for that will be introduced on Saturday.

David Smook made the climb up the hill from Cow Bay to join Carolina de Ryk at the Daybreak North Studios, offering this dramatic introduction to the local production and then settling in to chart some of the course of theatre in the community and how Harbour Theatre has high hopes for their newest soap.

The debut for the satirical look at Big Beer is this Saturday night with a stage call set for 8:30, with the doors opening at 8 for a bit of socializing.

The cast and crew return to the stage next Saturday at the same time with episode Two.

The troupe of thespians will then take a break through December and the holidays, picking up the soap opera trail in the New Year with episodes three, four and if the reaction is a positive one perhaps many, many more.

Those that may wish to put their acting skills to the test can also audition for future roles as part of the rolling ensemble, you can find out more about that this weekend or by contacting Harbour Theatre.

Find out more about the show from the Facebook page created for the event or the Harbour Theatre website.

More items related to community events on the North Coast can be found on our Community Notes archive page.

Email ThisBlogThis!Share to TwitterShare to FacebookShare to Pinterest
Labels: As the Port Churns debut