The NDP MP for Skeena-Bulkley Valley had a number of sharp comments for Maryam Monsef the Minister of Democratic Institutions, with Nathan Cullen rising in Monday's Question Period to take the Minister to task over recent comments and moves by the Federal Government when it comes to plans for electoral reform

During his Question Period time, Mr. Cullen chastised the Minister and the Liberals suggesting that they were undermining the work of the All Party Committee tasked to explore any potential change to how Canadians select their Members of Parliament.

Further to his exchange with the Minister, Mr. Cullen noted that the committee was just days away from delivering its report on the topic, clearly angered by the Liberals comments of the weekend that to Mr. Cullen have sidelined the importance of the committee's work.

On that theme, the NDP MP accused the Liberal Minister of throwing a Committee of the House of Commons under the bus and offered up a name change for her to that of Minister of Undermining Democratic Reform.

During his comments to the House, Cullen outlined some of the work that the Electoral Reform Committee had conducted in recent months, noting how thousands of Canadians had expressed their thoughts on the need for reform and asked the House why Minister Monsef had become the Voice of No.

For her part, the Minister observed that she was committed to the file since receiving her mandate and that the Federal Government was going to give the report the respect it deserves before developing a plan

The video of the Parliamentary exchange of Monday can be viewed below.


Mr. Cullen also took his concerns over how the Liberal government was backtracking on its commitments to his Facebook page, with a number of posts that highlighted his frustrations with the Minister of Deomcratic Reform. 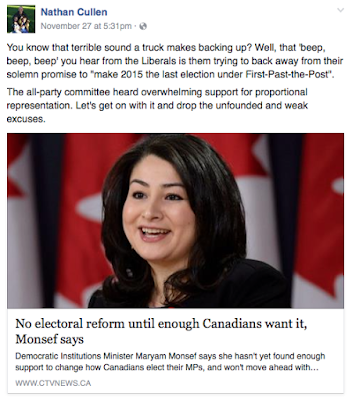 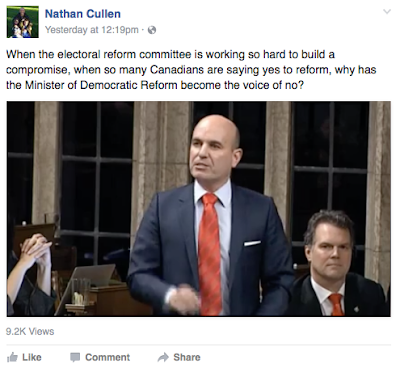 The Skeena-Bulkley Valley MP was one of a number of MP's who spent the summer and fall crossing the country to hear from the public on the theme of electoral reform.

During the consultation phase of the NDP MP released the results compiled from a survey across the Skeena-Bulkley Valley riding, with the findings seeming to champion the concept of a test drive for change to the electoral process, before providing for a final decision with a vote.

In recent weeks however, Mr. Cullen and the NDP moved closer towards the concept of holding a referendum before any adjustments to the process are made, which would allow Canadians the final say before any change to the current first past the post system.

You can review some of their work through the last six months from the archive found on our political portal D'Arcy McGee.

More notes on Mr. Cullen's work in the House of Commons can be found on our House Archives here.
Posted by . at 1:59 PM