The Kaien Island Krakens continue to ramp up their efforts to join in on the rebirth of the sport of roller derby in British Columbia, with the Prince Rupert/Port Edward group hosting three practices a week to learn the moves and hone their skills in the fast and physical activity.

And while they have yet to schedule any matches with other squads from Terrace or elsewhere in the province, the practice schedule should have them ready to challenge in a fairly short period of time.

Since October the team has been making use of both the Old Port Edward School Gymnasium and the Prince Rupert Civic Centre complex to learn their craft, always on the look out for new members you can drop in and check out the sport for yourself on the following evenings: 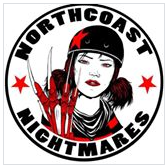 Be sure to check the teams Facebook page to take note of cancellations or other news of note from the Kraken squad, they currently feature some photos and videos of how the training is moving along.

The Sport has gained a foothold in the Northwest thanks to the work of the Terrace Based North Coast Nightmares who have been around for a few years now, the team has been travelling around the province during that time and finding a fair bit of success along the way.

In between matches, some members of the Terrace squad have been helping the Rupert team get their program launched.

With things ramping up for the local team, we've created an archive page to follow their travels through the fall and winter, you can find the page here and available in our Sports listings as part of the right hand column.
Posted by . at 1:02 PM