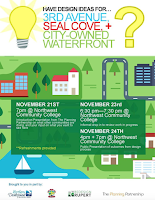 The City of Prince Rupert is hosting a string of public information sessions this week to seek feedback from residents on how they would like to see Third Avenue, Seal Cove and the city's waterfront lands evolve in the future.

The latest of projects that have been launched through the Redesign Prince Rupert initiative will welcome members the Planning Partnership to the city for a total of four days of consultation and concept development.

The Ontario based urban design firm was signed on to the project by the City in October, tasked to bring their expertise and to provide their guidance on the community engagement process.

The Planning Partnership has assisted in the redevelopment of a number communities across the country, and will bring some of those perspectives to this week's work as they look to provide residents with some concepts for future discussion.

Some of their past work can be reviewed here.

The four day process, which includes the three public consultation sessions starts tonight at 7PM when the Introduction to the project is delivered at Northwest Community College on Fifth Street.

Tuesday is given over to preparation work and consultation with a range of community groups and businesses leaders and other stakeholders in the community. With the consultants holding meetings and collecting further information on what residents have in mind to any form of redevelopment of the areas under study.

Wednesday offers up a chance to see the progress they have made in combining some of the feedback that they have received. The Public Session on Wednesday goes from 6:30 to 7:30 again at NWCC and will be the final opportunity for residents to offer up some guidance prior to the final presentation.

Thursday is the day of the big reveal, with a three hour Open House and Public Presentation of the outcomes of their design process, weaving in the community feedback with concepts that have been put in place in other communities.

The Grand Finale to the consultation sessions takes place at NWCC from 4 to 7 PM.

The four day redesign initiative was launched thanks to some funding from the Northern Development Initiative Trust, which contributed 75,000 dollars towards the project. An overview of what the city hopes to achieve from the four day consultation can be found here.

You can learn more about some of the work of Redesign Rupert from their website and Facebook page.

More items of interest related to developments from City Council can be found from our archive page here.
Posted by . at 9:00 AM

Email ThisBlogThis!Share to TwitterShare to FacebookShare to Pinterest
Labels: Consultations on City development this week at NWCC