At his Vancouver appearance, the Prime Minister relayed some of the details as to how the plan will function, though he was a little light on the specifics of it all when it comes to Marine protection on the West Coast and did not provide for the highly anticipated announcement related to the progress of an oil tanker moratorium for the North Coast.

“As a government, everything we do, and every action we take, is done with one goal in mind: we want to leave our kids and grandkids with a better place to live – whether we’re creating good, well-paying jobs for the middle class; ensuring our communities are safe and protected; or taking the necessary action to safeguard our environment. And by working together with our partners along the coasts and across the country, I know we can preserve our coastlines for generations to come.” —The Rt. Hon. Justin Trudeau, Prime Minister of Canada introducing the Government's Ocean Protection Plan

As for the Protection program, it will address marine issues on all three oceans, with the roll out of the plan offering the following approach to the issue of ocean protection for the Pacific coast.

Few people understand the unique challenges of Canada’s West Coast better than the Indigenous and coastal communities who call these shores home. The Oceans Protection Plan will leverage this traditional knowledge, creating new Indigenous Community Response Teams which will offer training for search and rescue, environmental response, and incident command. This will enable these communities to play a greater role in marine safety. Shared leadership opportunities with Indigenous and coastal communities in a number of areas related to managing vessel navigation locally will also be pursued.

The Oceans Protection Plan will increase West Coast towing capacity to enable rescue towing of large vessels and container ships. Building on previous pilot projects, a new regional oil spill response plan for the northern region of the West Coast will be developed to ensure a more efficient and effective response to marine incidents there. Four new lifeboat stations will be built in strategic locations to improve response times.

The online presentation that delivered the Federal Marine plans, made a strong use of video and infographics to outline the key elements of the project covering three key themes.

Development of a world-leading marine safety system, preservation and restoration of ecosystems and larger engagement with Indigenous and coastal communities. 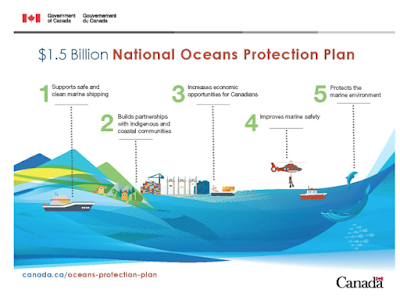 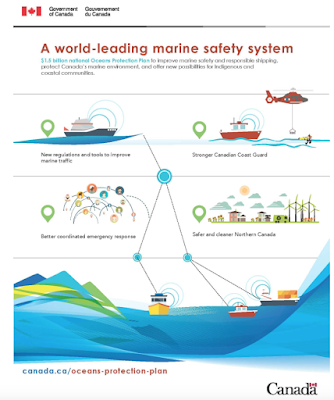 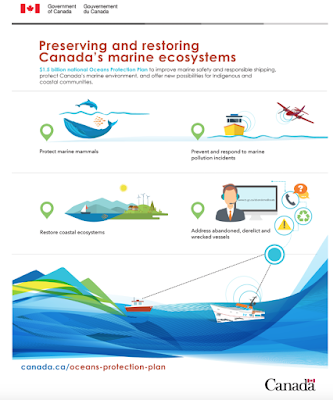 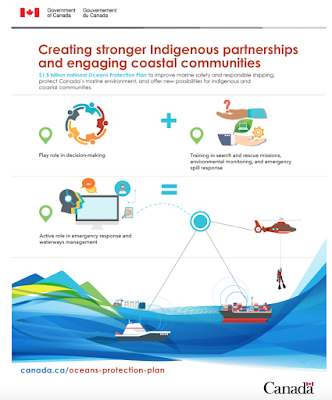 The Coast Guard will receive significantly more attention, with the promise to strengthen the Coast Guard's Marine Communications and Traffic Services, though no mention was made in the course of Monday's announcement as to how that may affect Prince Rupert base of operations at Seal Cove.

As well, Canadian Coast Guard vessels will soon see towing kits installed on major vessels to improve capacity and allow the Coast Guard to take swift action to avoid disasters.  The Government also announced that it  intends to lease two large vessels capable of towing commercial vessels and large container ships, though where those vessels will be based out of also was not disclosed as part of Monday's information session.

Port Hardy will see an increase in marine resources however, with the introduction of a new environmental response depot, furnished with modern response equipment and set to serve as the base for a dedicated Primary Environmental Team.

First Nation communities on the West Coast will also see a number of initiatives launched as part of the plan, including the creation of Indigenous Community Response Teams and the debut of a new chapter of the Canadian Coast Guard Auxiliary in British Columbia to support indigenous communities.

The full overview of the Government's talking points on the Ocean Protection Plan can be examined here.

For those awaiting some word on the much discussed theme of a moratorium on the transit of oil tankers on the North Coast, the wait will continue, with no word delivered on Monday that indicates any timeline to put any moratorium in place.

Premier Christy Clark applauded the moves of the day by the Federal Government, sharing the Prime Ministers' observation that it was long overdue, though she also noted that the details are still to be finalized and the plan implemented.

“I want to welcome the Prime Minister’s commitment to build a world-leading marine-safety system for the shipping traffic we have today. This is something I have been fighting for since I became Premier. “As the Prime Minister said today, this announcement is long overdue. Federal governments have for decades fallen short of providing adequate spills response and prevention on our coast."

British Columbia NDP Leader John Horgan focused on the quick acceptance by the Premier of the protection plan, noting that many of the details remain vague and observed how in his opinion the issue has not been a pressing one for the provincial government until recent weeks.

North Coast MLA Jennifer Rice offered up a short observation on the announcement of Monday through her Facebook page and twitter feed, noting that the announcement did not include a North Coast Tanker, however she offered little for review when it comes to how she views what the protection plan offers the region.

NDP MP Nathan Cullen is currently in the Unites States observing the US electoral process for the 2016 election, so there has been no update provided through his various information streams related to Monday's Federal announcement.  The Skeena-Bulkley Valley MP did make a few observations to some media groups in the hours following the rollout of the plan, noting the lack of an oil tanker moratorium for the North Coast and his concerns that the Government may be backing away from it.

Monday's announcement came as the Heiltsuk First Nation continues to deal with the aftermath of the sinking of the tug Nathan E. Stewart and with word of another marine incident off of Klemtu from Sunday night, which saw a gravel barge sink after taking on water.

That incident making for just one more reminder of the dangers of the transit along the Pacific coast and the need for a proper and effective response for any incident that may take place.

Some of the media review of the Ocean Protection Plan can be found below: