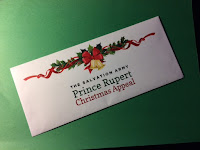 Over the course of the final days of last week residents around the North Coast received a note from the Prince Rupert Salvation Army, as Captains Gary and Nancy Sheils brought the community up to date on the start of the 2016 Christmas campaign, the last one as things turn out that the Sheils will be watching over in the region.

After fifteen years of service to the North Coast, the Sheils will be retiring in June, marking a long run of providing for some of those in the most need in the community, with the Christmas season the part of the year where the greatest demand for services is found for the Salvation Army and those that they partner with in Prince Rupert.

The numbers are startling for a city of less than 12,000 residents, last year at Christmas the Salvation Army called on the community for help and the response that they received allowed them to deliver assistance to more than 850 families, a total of 3,042 adults and children.

From the generosity of the North Coast food cards, toys for children and a small gift for each adult were provided during the 2015 holiday season.

With the economic situation found in the region this year much the same, if not a bit worse for many, the Salvation Army is preparing to meet the needs of the community once again for the Christmas season ahead.

Included in the letter to residents is an envelope should you wish to make a donation towards the Salvation Army's efforts both at Christmas and through the year. For the immediate need of the Christmas campaign, the annual appearance of the red kettles will soon start to be soon, offering the opportunity to make a donation at a number of locations set up around the city.

That along with a number of other plans from community groups and residents in the region will help to make sure that the Salvation Army can address the need for this season.

And while the focus is on the immediate need of the Christmas season, the work of the Salvation Army is a year long effort with a number of initiatives that are in place to lend a hand in the community.

Over the course of the last twelve months they have served over 41,000 meals at the Sally Ann Bistro, as well as providing help to some 2,100 families and singles through their Bread of Life Food Band.

As well, 1,200 North Coast residents have received free clothing and housewares through the services of the city's Salvation Army Thrift Store on Third Avenue West.

All of those programs have been made possible through the support of people around the region, something to remember as you pass by a kettle through the next month, or thumb through the pile of mail that you may have put aside from last week's mail delivery.

You can keep up to date on many of the events in Prince Rupert from our Community Notes archive.