NWCC expands its reach and interest towards International studies and students

The fall launch for post secondary education in the Northwest has seen the main campus of Northwest Community College in Terrace shift some some of its focus towards International studies and International students. As the Terrace based community college looks to become a destination point for students seeking a post secondary education in Canada.

The concept of expanding the scope of NWCC's plans was first outlined in June of 2015 when the college introduced Justin Kohlman  as a Vice President of Education, looking to make use of his experience to oversee it's plans for Student Development and International recruitment.

As part of the statement of appointment of last year, Mr. Kohlman provided a glimpse at that time as to what approach NWCC would take towards its expanded vision for post secondary education in the Northwest.

“Working with our faculty, staff and students, as well as the broader communities, I'm excited about what we can do to make our campuses the first choice of local and international students."

When it comes to the International outreach, NWCC is also tapping into his international experience, earlier this month the college announced a transfer agreement with Monash University in Australia, an institution which Mr. Kohlman began his career in post secondary education at in 2002.

In addition to the transfer agreement with the Australian University, NWCC is following up quickly on the recent visit to China by a delegation from Terrace, with the college offering two new 1,000 dollar entrance scholarships for students from Qinhuangdao, China. 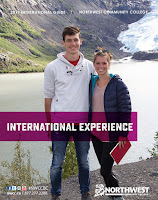 The scholarship program is one which is designed to build on the partnership that the City of Terrace has been cultivating with the Chinese city and is a program that Terrace Mayor Carol Leclerc has welcomed.

“We are delighted to see institutions such as Northwest Community College strengthening the partnerships we have been building with Qinhuangdao ... Welcoming international students to our community is one more way that we build cross-cultural relationships and have an opportunity to showcase the opportunities our region can offer.”

The new focus on International students and studies has been featured on the NWCC website, with a dedicated link towards the initiative available here, that entry point provides more background on the programs available, as well as admissions information for those interested in heading to the Northwest to further their education.

The main focus of the initiative appears to be mainly directed towards the Terrace campus and highlights the ability for NWCC to provide students with a personalized experience at a very affordable tuition rate, combined with a low cost of living compared to other communities.

A larger overview of the experience awaiting International Students can be reviewed here.

NWCC also has a video presentation, available through the NWCC YouTube page which showcases the program and offers up a glimpse at what international students think about their time in the Northwest.

NWCC has not as of yet outlined any numbers when it comes to current participation levels for the new International focus, or any background on whether other campus locations such as Prince Rupert's will be finding increased admission levels related to the initiative.

You can review more notes related to post secondary education in the Northwest from our archive page here.
Posted by . at 11:13 AM