Two current members of the Prince Rupert RCMP and two who were posted to the city detachment in 2015 have been presented awards for valour by the Province of British Columbia.

The honours are related to their efforts during the course of a 2015 fire in the city, recognition for having entered a smoke filled apartment building to search for and evacuate residents. 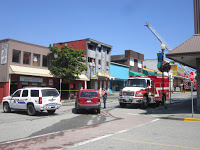 While a full account of the fire is not provided as part of the awards biography, the timeline for the award period would seem to indicate that it was the efforts of responding officers during the course of the New Moon building fire of July 2015 that have made for the honours related to this years award.

The Prince Rupert detachment members were among 56 men and women of law enforcement honoured by the Province in Victoria last evening, taking part in British Columbia's 35th Annual Police Honours Night on Thursday.

Sixteen officers received the award of valour the highest award in the province, while forty officers received recognition for meritorious service, awarded to those how show exemplary performance that exceeds expectations.

More background on the honours event can be found here.

Items related to the work of Emergency Response personnel in the Northwest can be found on our archive page here.

Update/Correction:  The fire for which the RCMP members were honoured was one that took place on Kootenay Avenue in June of 2015.
Posted by . at 9:05 AM

Email ThisBlogThis!Share to TwitterShare to FacebookShare to Pinterest
Labels: members of Prince Rupert RCMP honoured for efforts in city fire