The minutes on the court may be a little less than Justin McChesney is used to from the basketball seasons of the recent past, a period when he was the go to guy for Mel Bishop's Charles Hays Rainmakers.

But for the first year  forward with the UBC Thunerdbirds, the debut year of University ball is one to watch, learn and put to use all that he absorbs when the time to take the court comes around.

McCheseny is one of three newcomers to the UBC squad that have received a mention, as part of a recent look at how the Thunderbirds are approaching their U Sports (U Sports is the new name for CIS sports) for the year ahead.

Head Coach Kevin Hansen made note of McChesney's defensive skills, an element of his game that the T Birds plan to make use of while he continues to develop his offensive game in the competitive University ball setting.

In the article for the T-Bird website, the mention of the former Rainmaker came as part of a review of three exciting first year players that UBC has plans for as they continue along with the Thunderbird program.

"Amidst a deep veteran core, roster spots for new faces are limited. Still, the true freshman trio of Izaiah Ugoalah, Isiah Familia, and Justin McChesney forced their way into the lineup.

Ugoalah, an alum of Sir Winston Churchill Secondary, could make a two-way impact right away, fueled by his next-level athletic and defensive ability.

McChesney, a 6-10 forward out of Charles Hays Secondary, offers immediate help as a rim protector while his offensive game develops at the collegiate level."

The UBC also noted that the newest of Thunderbird players won't be just spectators as the season moves forward, but that he expects some big things out of the three high profile additions.

So far in his first seven games in a UBC uniform McChesney has collected 53 minutes of play, with the minutes expected to increase as he gains more experience and becomes more familiar with the pace and approach of the university game.

The full article looking at the first few weeks of the 2016-17 season can be found here.

A look at the box score to date for the one time Rainmaker can be viewed below (click to expand): 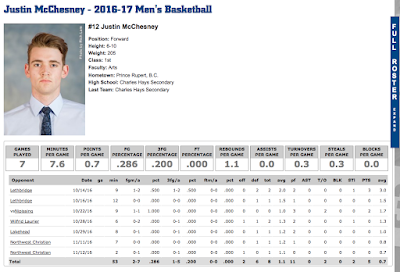 More notes on some of the young athletes playing sports away from the North Coast can be found here.

Email ThisBlogThis!Share to TwitterShare to FacebookShare to Pinterest
Labels: UBC has plans for McChesney and other first year players on basketball roster