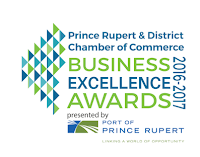 The thirty day window for nominations opened last Friday and already the categories are filling up as residents of the North Coast submit their best suggestions for the 2016-17 Small Business Awards.

The salute to North Coast business is organized by the Prince Rupert and District Chamber of Commerce and starts off with the collection of potential candidates for this years awards, a list that will be whittled down by community voting once the December 23rd deadline has come to an end.

There are Fifteen categories available for nominations in 2016-17 they include:


You can add your nominations to those categories here.

To be eligible for a nomination the nominees must be located in Prince Rupert  or the surrounding communities of the area. Awards are open to all businesses whether they are a member of the Chamber of Commerce or not.

Once the deadline for nominations arrives on December 23rd, Award organizers will collect the information and prepare for the Finalists announcement set for January 24th.

Those that will be in the running for the 2016-17 Awards will be feted at an announcement party. 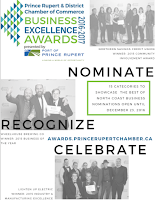 With the release of the final list the online voting will start on January 25th and continue through until February 2017 when the public will be allowed to make their selections as to which local businesses have caught their eye over the year.

A new approach to award time this year will see businesses only allowed to claim one award, should they be voted to the top of other categories that next runner up will be awarded the honours for those categories.

The highly anticipated Award show arrives March 4th at the Lester Centre of the Arts with the celebration of excellence in business in the community to also be broadcast through CityWest's Cable Ten channel.

You can look back at the 2015-16 celebrations from the Chamber's YouTube page which features the full broadcast from CityWest.


More items related to the city's business scene can be found on our archive page.
Posted by . at 12:41 PM

Email ThisBlogThis!Share to TwitterShare to FacebookShare to Pinterest
Labels: Chamber of Commerce