Rotating Strike for SD 52 set for Tuesday, as BCTF announces rotating strike program from May 26 to 29 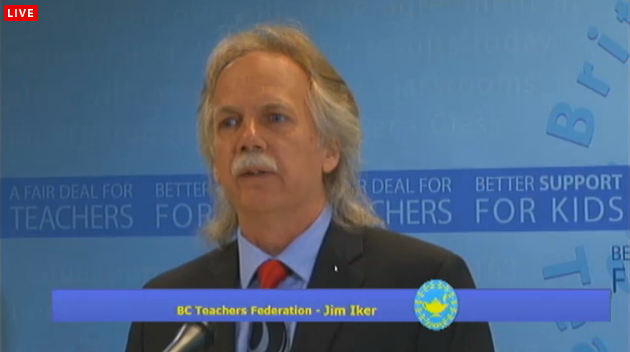 With a weekend to reflect on the lay of the land of labour between the province and the British Columbia Teachers' Federation, BCTF President Jim Iker took to the microphone today to express disappointment in recent developments in negotiations between the his union and the Provincial Government.

Heralding the retreat of the province on their expectation of a ten year deal as welcome, Mr. Iker then outlined how that hopefulness of progress, quickly gave way to disappointment based on developments later in the week.

"After sixteen months of negotiations, the Government is back to its old tricks, " --  BCTF President Jim Iker, reflecting on last week's developments in the ongoing labour discussions between the BCTF and Provincial Government.

During the course of his press conference Mr. Iker provided his take regarding the recent course of discussion which saw the province counter their olive branch of Thursday, with a larger stick of potential wage rollbacks should a disruption take place.

“Last week, teachers were hopeful when they saw the government and BCPSEA put out an olive branch by backing off the unrealistic 10- year term,” .. “But the next day, hope that this government would start negotiating in good faith faded when the employer announced a series of threats around wage rollbacks, lockouts, and attempts to divide teachers, parents, and students. -- BCTF President Jim Iker

With that as the scene setter, Mr. Iker then called on the province to reinvest in education. Providing a bit of background on how the BCTF views the recent tone of discussion and what they hope to engage the province to work towards.

Among those concerns, familiar ones that were again reviewed by the BCTF: class size and class size composition, the needs for better access to specialized assistance for students and unfair wage demands,.

He also reviewed the past moves by the provincial government when it comes to past collective agreements, reviewing how those moves had been deemed illegal in recent court rulings.

As for the recent carrot of a signing bonus in this current negotiation, Mr. Iker offered up the suggestion that the recent signing bonus would have been better directed towards the BCTF salary grid.

To give you an idea as to what that current salary grid looks like, this listing from the Make a Future career resources website offers up a benchmark as to what School District 52 Salary expectations were as of July 2010 (most recent info available from the site).

To close his fourteen minute summary of the recent negotiations and what comes next, Mr, Iker outlined that to move their message forward, the BCTF would now put in motion a second phase.

An escalation of the dispute which will see British Columbia's teachers now take part in rotating strikes, starting May 26th and continuing until May 29th.

That prospect of rotating strikes was first hinted at last week as we reviewed on the blog last Tuesday. The two sides return to the bargaining table this Thursday and Friday.

Any extension of the rotating job action schedule will depend on events that take part in those discussions.

As those rotating strikes take place starting Monday, the province has been divided in four school districts, with the North Coast to face the rotating strike action on Tuesday, May 27 .

You can review the BCTF press conference from this morning from the BCTF Video archive page.

More background on the proposed labour disruption (and the dates of rotating strike action in other Northwest School Districts) can be found from this news release. (A further update was provided later in the day, available here)

As the announcement was being released, traffic seeking further background from BCTF website served to crash the website in the mid-morning period.

For more details on the planned labour disruptions next week consult the BCTF Website once traffic subsides.

For further background on recent developments in the labour dispute see our archive of Education items.

As well to the local angle to education above, we have created an archive dedicated to the current state of negotiations between the BCTF and the provincial government, which will be updated as events warrant.

Email ThisBlogThis!Share to TwitterShare to FacebookShare to Pinterest
Labels: Rotating strikes to commence May 26th