The City provides its response to Watson Island case

The much anticipated City of Prince Rupert reply to the legal proceedings initiated by the Watson Island Development Corporation, has finally been delivered to the British Columbia court system.

A thirty four page response from the City's lawyers, that offers up a fair amount of background on the longest running story of the North Coast, with a good portion of the response featuring the City proclaiming the phrase "the city denies"...

In fact, over those 34 pages, that phrase is highlighted over thirty times. Covering off pretty well every item from the Watco Claim.

As the 48 points that make up the City's response to the legal issues come to its end, the key declaration has the City stating that "The City denies that Watco is entitled to the remedies claimed in the Notice of Civil Claim"

As its final point, the City advises that it is seeking special costs or alternatively costs.

The Court document of Tuesday is the foundation of a recent story in the city's weekly newspaper, which uses much of the background from it for their review of the latest developments regarding Watson Island.

However, for some reason that story appears to be focused on one comment from 2009, reportedly from the Lax Kw'alaams Band.

Which as the city outlines in the court filing, states that the Lax Kw'alaams Band "threatened conflict".

That aspect of the review of the court document appears in the headline of the Northern View story, as well as a good portion of the opening paragraphs of the story.

It makes for an interesting focus for that review, considering that five years have almost passed since that original talking point. And for the most part, its relevance to the current situation that the city finds itself engaged in is never really made clear.

And while the remainder of the article touches on a few points to be found in the court filings, it's that theme of "threatened conflict" that most will probably make for the major take away from the article.

Neither the court document, nor the article however, provides any background as to what shape that potential for conflict may have taken. Making for a topic that Lax Kw'alaams representatives might wish to clarify for their neighbours at some point.

While those items make for an interesting side story to the topic, when it comes to the current setback on the Watson Island files, careful reading of the court filing might suggest that the clock perhaps starts a few years after that correspondence.

With late 2013 as the trigger point for the latest events that have us all heading back to the courtroom.

It's in December of 2013 where the two parties appear to find themselves on different pages when it comes to the future of the Watson Island, particularly when it came to interpretation of the status of the proposed sale of the industrial site.

Those disagreements on events moved through January and into March, with legal counsel representatives exchanging correspondences regarding a range of issues related to the Agreement under discussion.

All of which led up to the March 27th announcement that Watco had advanced litigation to the British Columbia Supreme Court, you can review some background on that development here.

Tuesday's filing of its response by the City (two months to the day from when the issue first became known) provides its opening rebuttal to those claims and lays the foundation for what could be another lengthy stretch of time in the courts for Prince Rupert's most infamous conversation topic.

Local residents with an interest in the theme can access the document for themselves through the Court Services Office website. 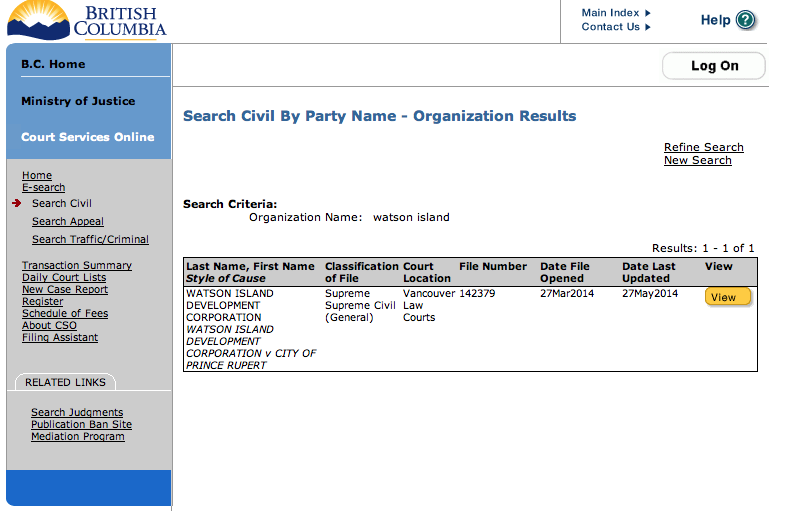 The cost of learning some of the intrigue behind the Watson Island story is a six dollar charge, with similar charges for further items if desired.

Those inclined can start the process here, type in watson island where it says organization and you will reach the CSO paywall to make your payment and then settle in for a little legal reading.

The full thirty four pages do provide a fairly useful recap of the travails of Watson Island, though this particular document is presented through the prism of the City's talking points.

All of it makes the six dollar fee about the best investment an interested Rupertite might make, when it comes to a historical review of the recent issues of the one time pulp mill site.

Perhaps as a course of transparency for its residents, the City of Prince Rupert might wish to secure a universal licence for the court documents and post them to its newly refurbished website.

Such a move would be a very helpful step for interested members of the community, who no doubt are concerned about how a deal that seemed to be closing in on the homestretch but seven months ago, so suddenly went off the rails.

With the City filing their paperwork with the courts, the prospect of any kind of negotiated settlement between the two sides would appear to be slipping far beyond the horizon. Leaving us all to wait for the court dates to be set and then to stand by, as the drama of Watson Island once again plays out in a court room.

Perhaps while we wait, Council might offer up some background information for the community when it comes to this latest development.

As we've seen in the past, this Council is never shy to weigh in on topics of community interest (of late topics have included, the Port, Pinnacle Pellet and Environmental issues on LNG to name a few).

We would hope they might be equally engaged when it comes to the status of the current impasse over Watson Island, as well as to the ongoing costs of maintenance and legal fees regarding the current situation.

You can  re-familiarize yourself with the talking points of the past with our items of interest on the Watson Island files from our Archive page.