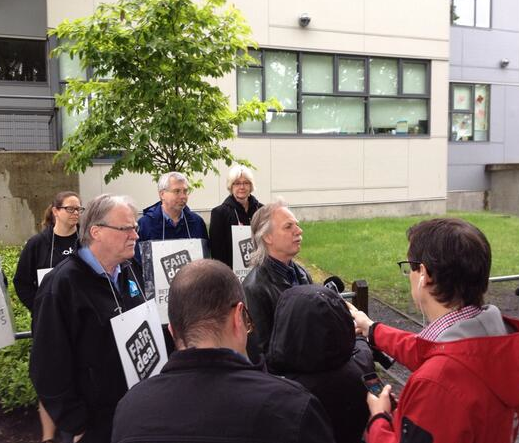 Education Minister Peter Fassbender offered up his first comments on the launch of rotating strikes across the province today, outlining the latest discussion points from the BC Liberal Government when it comes to the ongoing labour dispute in the education sector.

His opening remarks on the first day of the week long rotating strikes, pointed the government's finger of blame towards the BCTF as the picket lines appeared at a number of schools in the province.

“It is unfortunate that the BCTF leadership is shutting down schools with their rotating strikes - it is always students and parents who bear the greatest brunt when the BCTF orders teachers to walk out.-- Education Minister Peter Fassbender with the Government response to the start of rotating strikes at BC's Public schools

Mr. Fassbender also provided a list of concerns that the Government has on the nature of the dispute, carrying on the theme of the dueling press releases that made for much of last weeks back and forth between the BCTF and the BCPSEA.

For those looking to read the full statement from the Education Minister, it is available on the BC Government website.

The labour disruptions today, mark the start of four days of teacher walkouts across the province, Prince Rupert parents and students will find School District 52 teachers on the picket lines on Tuesday.

As we outlined last week on the blog,  School District  52 provided parents with a heads up as to its plans for tomorrow's local walkout.

As Monday's picket lines formed in those School Districts affected by today's strike schedule, the BCTF received support from a string of provincial and national union leaders, as well as from a list of NDP MLA's, many of whom took to twitter to offer their support to those off the job today.

And while the BCTF counts up those that are offering up their support so far. Of interest perhaps to the Prince Rupert District Teachers' Association, is the lack of commentary on events from North Coast NDP MLA Jennifer Rice.

As the dispute heated up over the last few weeks, the North Coast MLA has yet to have offered much, if any contribution to the theme of the labour dispute on any of her many social media portals or through her work at the Legislature.

While the back and forth plays out through media releases, the actual negotiations are set to resume this afternoon. With the first session since last week's developments set to bring both sides to the table again, looking to find some common ground, where at the moment little of it would appear to be in sight.

To keep up to date on developments in the dispute, check our archive page on the issues of the negotiations, which is updated regularly through the day.
Posted by . at 11:36 AM

Email ThisBlogThis!Share to TwitterShare to FacebookShare to Pinterest
Labels: BCTF rotating strikes day one, May 2014