A Ford Farewell for Prince Rupert 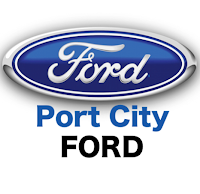 For those that are brand loyal when it comes to their automobiles, news this week of the pending closure of the Ford dealership, Port City Ford, will no doubt be a disappointment at the latest turn of events for the North Coast auto scene.

The local dealership, which had been part of the community for the last ten years will soon join the previous ghosts of Ford on the North Coast, following Kaien Ford and Parker Ford before it into the history books for the city's automobile dealership sector.

The daunting prospect of having to invest between $500,000 to 1 million dollars in renovations to the Prince Rupert location, was the apparent guiding factor in the decision to close the operation at the end of August.

The parent company at Terrace Totem Ford finding that financial requirement too much to justify, making for the decision to wrap up the operation of their satellite storefront operation on Saskatoon Avenue in the Yellowhead Centre.

The closure will affect the sales, administration and service departments, with the possibility that some of the soon to be displaced staff may find employment with Ford at other locations in the province.

Current vehicle owners will be contacted by the Terrace dealership with details on warranty and service coverage through the Terrace location, while potential tire kickers will have to make the drive down Highway 16 should they be interested in the fall line up of vehicle offerings from the national dealer.

For Prince Rupert residents that means that the local options will now be down to two when it comes to the major car dealerships, with McCarthy GM and Rainbow Chrysler the final two of the national brands to offer local sales and service.

The decision to close the Prince Rupert location was announced in the same week that Terrace City Council was celebrating the announcement of a major purchase of land from the City by the Terrace Toyota dealership, which will be expanding its dealership offerings to the Northwest through a new showroom and lot at Keith Avenue and Kenney Street.

The Toyota plans are just the latest of large scale improvements in Terrace when it comes to automobile dealerships, reinforcing that city's place as the destination for auto seekers in the Northwest who may wish to compare all of the options available when it comes to an automobile purchase.

Some background on the week's Northwest automotive news can be found below:

More on commercial sector developments in the Northwest can be found from our archive page.
Posted by . at 10:48 AM

Email ThisBlogThis!Share to TwitterShare to FacebookShare to Pinterest
Labels: Port City Ford to close in August