The Department of Fisheries and Oceans has fired off the starting gun for the 2015 salmon season, with vessels having just completed the first major opening of the season for Area  Three, with two, sixteen hour openings that came to an end at 10 PM last night.

Gill net operators and seine boats started their first fishery on Monday morning at 6 AM and began the process that kick starts the local fishery and finally provides some work for local shore workers at area plants.

While the first opening was still in progress, DFO was reviewing their information and late Tuesday, issued a second round of updates outlining the terms for a Gill Net and Seine fishery in North Coast waters for this weekend.

Notices for Area Three Seine fishermen specified two, sixteen hour openings in effect for Friday July 17 from 6 AM to 10 PM and again on Saturday July 18 for the same period of time.

The full Notice for seiners can be found here.

Gill Net fishermen will also have fishing opportunities for the same period of time on both Friday and Saturday.

The DFO announcements follow recent advisories from Nisga'a Lisims Government which outlined a number of openings for the Nisga'a in recent days.

The announcements for the North Coast make for the first significant openings of the commercial harvest season for 2015 and begins the process that kick starts the local fishery and finally provides some work for local shore workers at area plants.

Further updates on the 2015 season can be found here.

The Department of Fisheries and Oceans provided an overview of the fishing season on Tuesday morning, highlighting some of the challenges that this year has provided for to this point.

DFO delivered some of the talking points for the season ahead through their twitter feed yesterday. 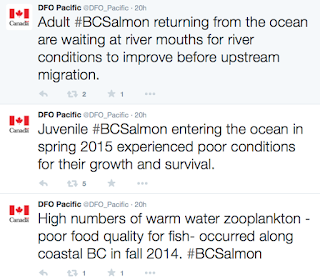 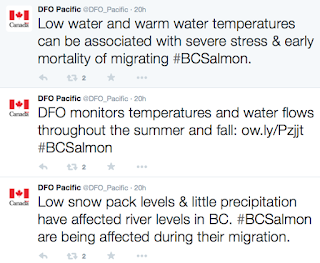 Reviewing the water levels, weather conditions and stock assessments through July will determine the number of potential openings ahead and what kind of Salmon run area fishermen and shore workers can expect as the summer comes to a close.

Update: DFO issued an amended opening notice on Wednesday, changing the days of the seine opening to Thursday and Friday, you can review the full amended notice here.
Posted by . at 8:47 AM

Email ThisBlogThis!Share to TwitterShare to FacebookShare to Pinterest
Labels: Fishery openings announced by DFO for July 2015