With a clerical error having denied a pair of top Canadian badminton players from the Pan AM games, Prince Rupert's Adrian Liu and Vancouver's Derrick Ng are looking to the public now to keep their dreams of an Olympic qualification in place.

As we outlined on the blog on July 10th, the pair were shocked to learn of the clerical screw up just hours before they were to take to the court following the opening ceremonies of the Toronto games this month.

The problems for the pair became worse after the clerical error that disqualified them from the Pan Am games was announced, resulting in a major sponsor pulling their financial commitment to the pair, owing to the lost points that came from their Pan Am games absence.

With a 40,000 dollar bill ahead of them in order to participate in the 18 tournaments that they will need to make up those qualifying points, Liu and Ng have turned to a crowd funding campaign to try and raise the money required to compete.

The CBC has more background on the Badminton Canada error and the slow nature of their response to the plight of the two badminton players, leaving the pair to try and find their own funding to make their way to Brazil in 2016. 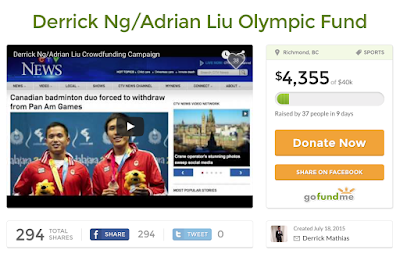 The fundraising initiative has been underway since July 18th, as of this morning, more than 4,300 dollars towards the forty thousand dollar goal had been raised towards their tournament ambitions by mid morning.

You can log onto the Adrian Liu/Derrick Ng Olympic Fund here.
Posted by . at 10:11 AM