North Coast Mayors speak on LNG from steps of the Legislature

Mayor Dave MacDonald and Mayor Lee Brain were both on hand in Victoria on Tuesday as Premier Christy Clark marked the final day of discussion on the Pacific NorthWest LNG agreement.

The Premier welcomed the two Mayors to the Legislature, while at the same time highlighting her belief of the nature of change that the proposed LNG development for Port Edward could bring to the entire region.

During an address from the steps of the Legislature, the Premier called on some of the large scale projects of the province's past and noted that the prospect of LNG Development in the Northwest offered up the same opportunity for British Columbia to achieve a vision that assures the future of the province for a long, long time.

Following the Premier's opening remarks, she turned to two Northwest politicians to offer up their thoughts on the prospect of development in the region.

Mayor McDonald noted the number of residents who left following the closure of the mill and how the prospect of LNG development provides for the a chance to bring many of those that left the community to come home and for those currently living in the community to stay in the region.

For his part, Mayor Brain spoke more to the general nature of planning that Prince Rupert is working towards, speaking of his LNG GO Plan and a new initiative called Rebuild Rupert, which it would appear is designed to address issues of infrastructure concerns.

As part of his notes, Mayor Brain noted that the City of Prince Rupert would be looking to partner with the province and the proponents to make LNG a success in the region.

The Premier's talking points and the observations from the Mayors can be viewed below:

The Liberal Government made quick work of the photo opportunities from the days events in Victoria, with both the Premier and LNG Minister Rich Coleman using their various social media platforms to make mention of the visit from duo the North Coast. 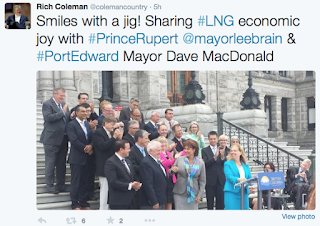 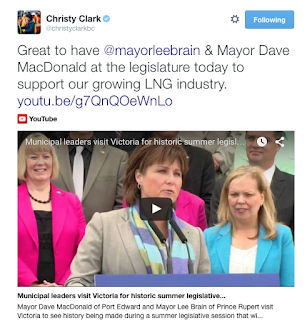 For more items on the Pacific NorthWest LNG project see our archive page here.
Posted by . at 7:14 PM