Crime trends for Prince Rupert would appear to edging up in the wrong direction, as Statistics Canada releases its latest Crime Severity Ranks for the year ending 2014.

The review of all communities with a population over 10,000 provides a snapshot of reported crime across the nation and for Prince Rupert, those numbers are showing that the members of the RCMP were working more files of a violent nature in the last year on the North Coast.

The Overall Ranking for Prince Rupert is now 12th, up one from thirteenth place of last year in the race that we probably don't want to win.

While our listings in the rankings of Violent Crime jumped a startling four spots, from 11th place last year to 7th with the most recent survey results.

The Chart below provides a look at the Crime Severity Index percentages and weighted clearance rates for Prince Rupert from 2010-2014. The items listed over the last year show increases in all categories with the exception of Non violent crimes.  (click to expand) 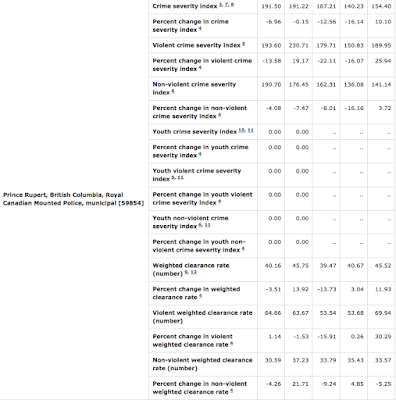 Of all the communities of Northern British Columbia listed, Prince Rupert has only Williams Lake between us and the top of the Northern listings for both categories.

The Central Interior city is 2nd Overall in the Crime Severity Rankings and First overall when it Comes to Violent Crime.

It's of interest to note that while the numbers from the North Coast are going up, an hour and a half inland, Terrace saw significant reductions in both categories.

According to the Stats Can figures, Terrace is now listed at 19th overall in Crime Severity, a drop of nine spots from last year when that city was the ranked at the 10th position.

As for Violent Crime Rankings, Terrace has dropped from it's 8th place position of last year, down to 17th with this years review.

Part of that success for the Terrace detachment could come from the nature of their information program, which provides for regular communication with the community.

Terrace RCMP regularly provide updates on the files they handle in the community, something which may make residents there more vigilant and more inclined to call in incidents that other areas of the Northwest.

You can examine the full Crime Severity Index Study from this link to the Statistics Canada website.

For those that like to dig deep into the statistic review, the Crime Severity Index file can be found below:

Those living across the Northwest can Add or remove the community that you wish to examine.

For further information on Emergency Service files of the Northwest see our archive page here.
Posted by . at 9:20 AM