When North Coast MLA Jennifer Rice chose to skip the final vote in Victoria this week on the Liberal Government's LNG Agreement with Petronas, she cited a prior commitment to the community of Wuikinuxv (Rivers Inlet) as her reason for her absence from the Legislature.

Noting on her Facebook page this week that she had accepted the invitation from the First Nation community "well before the Premier called the rushed LNG legislation." 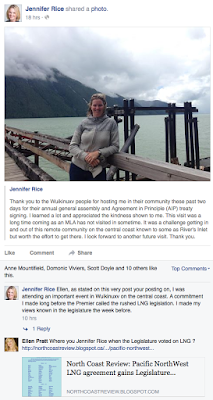 That was a decision we imagine that a fair number of constituents will probably take issue with, considering the importance of the LNG issue to the North Coast and Prince Rupert/Port Edward in particular.

However, putting aside the LNG debate for a moment, even the reason that the North Coast MLA gives for missing the Legislature session seems a little puzzling, particularly when you consider an information release yesterday from the Provincial Government.

The statement from the Ministry of Aboriginal Relations and Reconciliation, which is dated Thursday, July 23rd heralds the signing of that day, of the Agreement in Principle with the Wuikinuxv First Nation which has a population of 290 registered members.

It is a document that will signal the start of negotiations towards a Final Agreement on Self Government for the community.

Mark Strahl, Parliamentary Secretary to the Minister of Aboriginal Affairs and Northern Development, John Rustad, British Columbia’s Minister of Aboriginal Relations and Reconciliation, and Rose Hanuse-Hackett, Chief of Wuikinuxv Nation, today signed an Agreement-in-Principle during a ceremony in Wuikinuxv Village, on the central coast of British Columbia.  -- A segment of statement from the Provincial Government highlighting the signing on Thursday of the Agreement in Principle with the Wuikinuxv First Nation

As events appear to have developed in Wuikinuxv, MLA Rice seems to have missed the actual signing of the Agreement, as she has made no mention of it through any of her usual information platforms of her website or Facebook page.

As well, no photos of the signing ceremony, something that seems common for politicians these days, have yet to appear on her frequently used photo archives.

What might raise a few eyebrows on the North Coast is the fact that as the media release notes the Agreement in Principle Signing took place on Thursday, two days after the Final Vote on the LNG Agreement in the Legislature.

Considering the momentum of how government works, it's safe to suggest that the date of July 23rd had been in place for a fair bit of time to allow for the schedules of the provincial and federal government ministers in attendance.

That might suggest that the North Coast MLA perhaps could actually have honoured her prior commitment to the community of Wuikinuxv, simply by delaying her trip to the region to follow the LNG vote and attending the actual signing of the Agreement when it took place.

Had she made the journey to the region for the Thursday signing, she then, would have honoured both her commitment to the First Nation and the commitment that she has to her constituents in the remainder of the riding.

Instead as the MLA recounts through her social media postings of the week. Ms. Rice chose to spend the weekend and start of this week on the Central Coast, rather than to take her place in the Legislature to vote on an issue she has been quite vocal about from even before her entry into provincial politics and a topic that she was very passionate about in the Legislature on July 14th.

At some point one hopes that Ms. Rice will take some time out from the summer vacation that MLA's are now on and offer up some clarification for her constituents, explaining as to why she didn't rearrange her calendar to attend to both important events.

More background on the weeks events in Victoria and the Central Coast can be found below:

With a Facebook note, the Mystery of the Missing MLA is solved
Pacific NorthWest LNG agreement gains Legislature approval, MLA Rice does not cast vote

Further information on developments from the Legislature can be found on our archive page here.