Skeena and Stikine MLA's weigh in on LNG; Minister Stone with the rebuttal 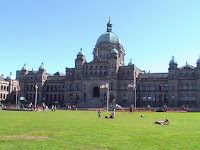 The second day of discussion in the Legislature on the recently announced agreement between Petronas and the Provincial government provide opportunity for two other Northwest MLA's to offer up their comments on the theme.

Monday, provided North Coast MLA Jennifer Rice her opportunity to outline her opposition to the proposed development for Lelu Island.

On Tuesday, NDP Members of the Legislature from other Northwest constituencies had their chance to expand on their commentary.

With Doug Donaldson for Stikine and Robin Austin of Skeena taking the opportunity to outline some of their thoughts and concerns related to the agreement.

For the Stikine MLA the issue of Aboriginal title is a key aspect of the agreement, particularly as it may affect the Gitxsan of his riding and what Mr. Donaldson stated was a lack of proper consultation with them by the Provincial government.

The issue the B.C. Liberals fail to understand is that the pipeline that is part of the Petronas LNG project does not cross reserve land in Gitxsan territory. It crosses hereditary house group territory subject to aboriginal title. And the spokesperson for ... one of those Gitxsan house groups, says they've never been consulted, that government decisions are based on inadequate information and missing information regarding their territory and that they will never support the project without proper consultation and information.

So I'd say to the B.C. Liberals that you have a problem, and it is of your own making because this project development agreement means you are saying no to aboriginal title. The agreement doesn't even include First Nations as signatories. They are relegated to the appendix under "Other matters," and that is where it gets even worse. Wording in the appendix dictates there is no obligation by the province for consultation to lead to agreements with First Nations on an LNG project.

Yet before any future comprehensive deals like treaties are signed, this agreement obliges the province to first consult with Petronas. How fair is that? Imagine how that feels for a First Nation when they hear a word like "reconciliation" coming from this government, then are faced with that kind of commitment by the province.

Mr. Donaldson then turned towards some of the fishery concerns of Lax Kw'alaams First Nation, issues that he stated were shared with residents living in his riding.

And then we come to the Lax Kw'alaams, whose traditional territory including Lelu Island and Flora Bank, where the Pacific NorthWest LNG plant that is the focus of this bill is proposed to be built. In May they held three community meetings to review the benefits agreement offer by Pacific NorthWest LNG. The deal was worth over $1 billion. The Lax Kw'alaams rejected it. They said this showed it is not about money but about environmental and cultural issues.

They are not open to development proximate to Flora Bank. That's because Flora Bank provides a one-of-a-kind service to salmon smolts migrating from the Skeena River into the open ocean. Eelgrass beds provide cover and a feeding zone for the smolts as they adapt from freshwater life to salt water — a very vulnerable time for the smolts. It is critical habitat for the Skeena salmon run that provides food and economic returns for the Lax Kw'alaams and upstream First Nations like the Gitxsan and the Wet'suwet'en as well. The Lax Kw'alaams remain concerned that the Pacific NorthWest gas LNG facility poses significant environmental risk to the salmon.

That is something the Canadian Environmental Assessment Agency agreed with in halting their review of the project in June, requiring Pacific NorthWest LNG to provide more information regarding potential impacts of the facility. I might add, it was also part of the reason why the federal government refused and declined an environmental assessment certificate in the 1970s for an oil tanker terminal in the same area.

For Skeena MLA  Robin Austin, the location of the proposed terminal also raised a number of red flags for him and provided for a number of questions for the government.

Mr. Austin also made note of the recent merger of Shell and BG Gas and the expectation that the proposed Kitimat location will be the one moving forward after that merger.

He then suggested that the Ridley Island location selected for the BG Group's proposed development might soon be available, offering up the belief that  Ridley might be a better location for the Petronas proposal.

Let me speak also in terms of the environment and the concerns that people have around Lelu Island specifically. I've met with other proponents who have other locations up and down the coast north of Prince Rupert. They said to me that they looked at Lelu Island right at the beginning, and they ran away from it. They walked away from it. There is a record of the federal government doing an assessment in the 1970s about potential for industrial development on Lelu Island, and in the 1970s the federal environmental office said: "This is not a good location." Was that ever shared with Petronas when they first came looking for a location?

Now that the BG Group is being absorbed by Shell, has there been any discussion as to whether the BG Group's location, which is certainly, environmentally, much safer than Lelu Island…? Have there any discussions about what's going to happen with that site now that the BG Group is going to be absorbed by Shell? I hardly think that Shell is going to be continuing to promote their site in Kitimat, which is a very good site, an industrial site, once the home of Methanex. Are they going to be building another one in Prince Rupert? Highly unlikely.

These are the kinds of things that should be looked at instead of just saying: "Yes, we're going to put this on an island with this massive Flora Bank right next door." All the salmon from one of the largest non-industrialized rivers in North America, millions of salmon, come down there every year and hang out in this eelgrass bed. Is that, environmentally, the best that this government can do? Seriously? That's the best that this government can do? And say that we are protecting our environment?

Both MLA's also touched on other environmental concerns, the issues of job creation and differing interpretations as to how many jobs would be made available to local residents as well as concerns over how the agreement locks the province into tax rates over a twenty five year period.

The NDP talking points on the morning were addressed by the Liberal Government's Todd Stone, with the Minister of Transportation weighing into the discussion of the day to provide some of the Government's points of note on the LNG file for the morning session.

During the course of his overview, Mr. Stone directed a fair portion of his commentary towards ongoing engagement in Prince Rupert and with the First Nations of the North Coast.

We are strongly committed to continuing to engage with Coast Tsimshian and other First Nations in the northwest, in the central part of the province and, indeed, in the northeast. In fact, 14 agreements have already been reached with First Nations up and down the proposed pipeline corridors.

We're also working extremely hard with the Lax Kw'alaams to address their specific concerns ... This is all about ensuring that every single British Columbian — First Nations and non–First Nations — has the opportunity to participate in the benefits of the LNG industry: revenue-sharing; good-paying, family-supporting jobs; and environmental stewardship.

As part of that overview, when he wasn't speaking on the theme of North Coast MLA Jennifer Rice's fact checking skills, the Transportation Minister was highlighting some of the infrastructure items that would require attention.

Just yesterday the member for North Coast got up, and she said: "We haven't seen their long-term royalty agreement, which was passed in the miscellaneous statutes bill, Bill 23, this past spring." And guess what. "Its contents are secret, so we don't know what else it contains."

The royalty agreement that the member for North Coast references is locked away in that deep, dark secret place. It's call the Ministry of Natural Gas website — once again reflecting that the members opposite have no idea what they're talking about.

In Prince Rupert we are planning road connections between Prince Rupert, LNG sites, First Nations communities, the airport — connecting a complex region where key facilities and local communities are located on a range of islands as well as on mainland British Columbia.

We have recognized the impact and the vital opportunity for the region, and we are seeking to gather information from all local communities and from First Nations so that we can make the best decisions possible to wisely allocate funds.

You can review the full account of the morning session from both the NDP and the Liberal Government from the Hansard record of Tuesday morning, the LNG discussions get underway at the 10:50 mark.

The video review of the LNG discussion in the Legislature on Tuesday can be found from Chamber Video archive, following the same timeline as the Hansard archive.

More background on the Pacific NorthWest LNG proposal can be reviewed here.

For further information related to events in the Legislature see our archive page here.
Posted by . at 8:36 AM