The CBC has offered up another response to concerns related to programming on the North Coast, replying to a letter from the City of Prince Rupert and providing an overview of the service that they provide to the region through the Daybreak North program.

Noting that two members of the Daybreak team are based in Prince Rupert, Lorna Haeber, Director of Programming for the CBC outlined how recent budget cuts had not had an impact on the positions of Carolina de Ryk and George Baker who hold down the fort on Third Avenue West.

In the letter from July 10th, Ms. Haeber also observed as to the nature of the Daybreak North programming model which produces programming relevant to the larger audience of Northern British Columbia, while at the same time reflecting the unique characteristics that make up the community which the local broadcasters live.

The CBC executive also addressed some of the concerns that City seemingly included in their recent correspondence, advising that issues such as survival information and marine weather reports have been strengthened, with the marine weather incorporated into weather breaks both during the Daybreak North program and through the day.

As for some apparent programming requests by the City, that the CBC include shipping reports and announcements of memorials, Ms. Haeber observed that the CBC does not have the capacity to provide either of those recommendations on an ongoing basis.

On the theme of community involvement, she also made note of the recent Street party hosted by the CBC in front of City Hall, as well as a BC Almanac program hosted by Prince Rupert's Gloria Macarenko and broadcast from the CBC's Prince Rupert studios during Homecoming in May.

Also listed in the reply to the city were some of the other events that the CBC have provided a focus on in recent months, highlighted by a three day visit by Radio West during the February All Native Basketball Tournament.

You can review the full letter to Council by clicking on the copy provided below: 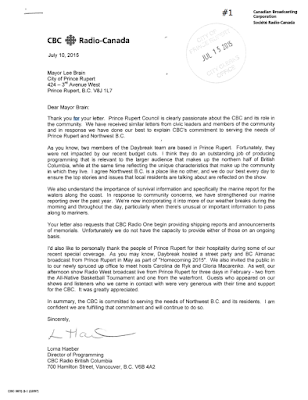 Ms. Haeber's correspondence is not the first time this year that CBC officials have responded to community concerns on the nature of programming in the region.

In May, Johnny Michel, the Senior managing director for CBC British Columbia and Alberta responded to an article from the weekly newspaper, providing some of the CBC's counter points to issues raised regarding the quality of broadcasting in the region.

As we've noted on the blog in recent months, the CBC has been in the spotlight on the North Coast with local listeners hosting public meetings to discuss their concerns and suggestions for improvement of local CBC service in the region.

The City's letter to the CBC follows up on those concerns which were raised by local listeners at a City Council session in April, as well as through a request for the city's support in their quest to improve the programming available.

You can review some of the background on those sessions from the links below:

For more items related to the media in the Northwest see our archive page here.
Posted by . at 8:18 AM