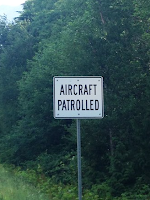 There's a good chance if you received a ticket on Highways 16 or 37 on July 7th you might be able to say you never saw it coming.

On Wednesday, the West Pacific Region Traffic Services outlined the success of a four hour blitz that utilized the RCMP Air Services plane out of Prince Rupert, which conducted enforcement work on the two highways on Tuesday.

When the final numbers were tallied up, the RCMP units on the ground had issued a number of tickets and warnings on speed, as well as a number of other tickets for other offences.

Among the results of the four hours work:

"This was the first time this had been done in the area in awhile, it was found to be quite effective and police were able to see things that they would not see in the course of a normal patrol ... It allows for easier targeting of the aggressive drivers, the ones that are tailgating and dodging in and out of traffic. With how effective it was, be prepared to see more of it in the area."-- Corporal Philip Crack of the Integrated Road Safety Unit out of Terrace on the use of aircraft for traffic enforcement on area highways.

The use of the air asset won't be on a day to day basis through the summer, however with the success that Tuesday provided in raising awareness on road safety during the busy travelling season, it's safe to believe that the plane will again take to the air at some point.

The RCMP used the exercise of this week to remind motorists to slow down and maintain a safe distance when travelling on area highways. The warnings are of particular note for North Coast residents making their weekend travels into the Terrace and Kitimat region and back home again.

More on the Tuesday air observation program can be found here.

For further items related to Emergency Service items of the Northwest see our archive page.

Email ThisBlogThis!Share to TwitterShare to FacebookShare to Pinterest
Labels: RCMP use aircraft for Highway 16 and 37 patrols