It would seem that the previous years exuberance in the real estate market has given way to a bit of caution for those looking to buy in Prince Rupert, with the latest numbers from the British Columbia Northern Real Estate Board highlighting a significant slowdown in sales for the first half of this year.

In its review released July 13th, the report  noted that Prince Rupert had reported 109 properties worth $24.5 million sold through the MLS service to the midway point of 2015, a decline of close to fifty percent from numbers of 2014.

Last year at this time, the real estate market provided a much different picture, with 197 properties sold worth 40.3 million dollars.

The median price for a home in Prince Rupert for the first six months of this year was $238,000, with the average time period of 109 days to sell.

As of June 30th, there were 186 properties of all types available for purchase through the MLS service in the city.

At the midway point of 2015, Prince Rupert currently is currently found in the middle of the pack of the fifteen communities listed when it comes to average home prices.

Over the last three years however, the average selling value has increased by close to 50,000 dollars. In June of 2013 the average cost of  Prince Rupert home was $193,756.

Elsewhere in the Northwest there were similar trends, though Terrace so far is finding a bit more movement that its  other neighbours in the region.

The summer dip in sales for 2015 was also felt in Kitimat, where 40 properties have been sold to the midway point of 2015, the total value of those sales was 11 million dollars.

That marks a more than fifty per cent drop from last year when 94 properties were sold by June 30th of 2014, fetching 26 million dollars by the end of the first six months.

As of June 2015, Kitimat had 102 properties of all types listed for purchase through the MLS service.

Things are a little more active in the Terrace area, though it too has seen some dips in the year to 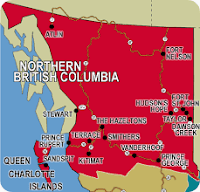 So far in 2015 real estate agents have sold 144 properties worth 35.7 million dollars, that compares to the numbers registered in 2014 when 201 properties had been sold by June 30th, taking in 48.4 million dollars.

Of the 80 single family homes that have been recorded as sold so far in 2015, half of the Terrace housing stock has sold for less than $266,000. It doesn't take as long to sell properties in Terrace, with the average amount of time to turn around from For Sale to Sold coming in at 70 days.

At the end of last month, Terrace realtors had 209 properties of all types listed for purchase through MLS in the Terrace-Thornhill region.

Of the four main Northwest communities, Smithers is currently the most stable of the real estate markets. The first six months of 2015 found 132 sales of properties in the Smithers area, to a value of 33.3 million dollars.

That is only a drop by 2 sales from this time last year, in June of 2014 Smithers realtors had sold 134 properties worth 30.3 million dollars.

To this point, half of the 63 homes sold in 2015 have been for less than 272,000 dollars with that average home in that community needing only 80 days to find a buyer.

As of June 30th, Smithers real estate listings were showing 273 properties of all types available through MLS.

The Peace Country continues to be the home of the highest real estate values, with Fort St. John hosting the highest average price of $422,277, the least expensive housing can be found in Burns Lake where the average price is now listed as $110,949

The three year comparisons for all communities across the North can be found below.

You can review the full comparisons for all communities served by the Prince George based Real Estate board from this article from their website.

More items related to Housing in the Northwest can be found here.

As well, for those looking to track properties in Prince Rupert on a week to week basis, we offer up our review of the top ten priced listings on the market each Monday morning, you can find that archive page here.
Posted by . at 8:49 AM