A bit of political theatre played out over the weekend on twitter, as an executive of the BC Liberal Party made note of some subtle changes to the information flow from North Coast MLA  Jennifer Rice's social media portal on Facebook.

Laura Miller, who is the Executive Director of Today's BC Liberals, engaged in a fairly vigorous discussion with the North Coast MLA over the shifting focus of her Facebook entries of the last week and the apparent revision to the timeline of her activities.

Of particular note was what seems to be the banishment of a photo and synopsis of Ms. Rice's time last week on the Central Coast, which according to one of Ms.Rice's twitter notes in the back and forth with Ms. Miller, has now been moved to a photo archive.

However, if it is again available among her Facebook offerings, it would appear to be very hard to try and track down with a search of her political archive page. 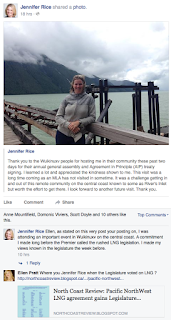 That shift of information and sudden maintenance of her Facebook page, certainly has made the North Coast MLA the focus of some weekend attention.  With the MLA engaging in a fairly interesting exchange on why she was not in the Legislature for the Final Agreement vote of last week, as well as some of her thoughts on the Agreement between the Province and the Malaysian energy company Petronas.

Considering the focus that the Liberal government attached to all three NDP MLA's from the Northwest and their notes on LNG development during the LNG debate. Ms. Rice probably shouldn't be too surprised at all of  the attention to her absence in the Legislature and the nature of her ongoing response to it.

However, through her actions of the last week, Ms. Rice may have added yet one more item to the list for the Liberals as far as talking points on LNG for the future.

One imagines that her lack of participation in that final vote and the handling of her information updates over the weekend, probably will come up once again, particularly whenever the next Provincial election campaign comes down the road.

Some of the back and forth of the twitter conversations with a number of Liberal activists can be found below: (click on entries to expand) 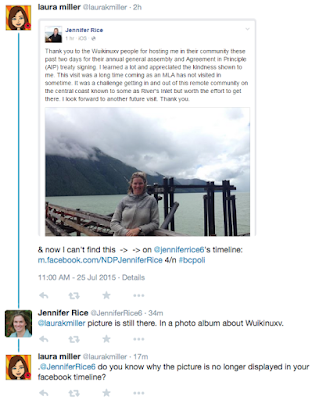 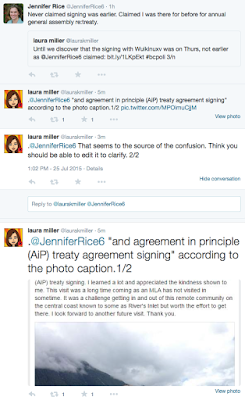 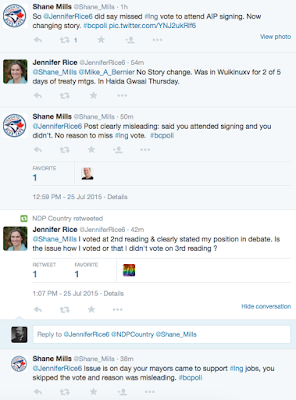 Last week, clearly wasn't a great week for the North Coast MLA when it came to decision making,.

Ranging from where she chose to be during the final LNG Vote in the Legislature, to changing the recorded timeline of her Facebook page, which would appear to be redirecting any attention to her time on the Central coast.

And while it's interesting to watch how Ms. Rice spent her Saturday afternoon with the political types and the back and forth of the point/counter point aspect of the very public forum that twitter has become.  There would seem to be some people missing in the directed information flow.

Other than her twitter flare up of the weekend and a now rather hard to find entry to her social media flow, Ms. Rice hasn't had much to say on the topic of the missed vote of last week.

Particularly missing from her discussion points on the theme is something directed to those that should matter the most, the voters of the North Cost riding that she represents, that's an oversight that she might wish to address sooner rather than later.

For more items related to events at the British Columbia Legislature see our Archive page here.
Posted by . at 9:39 AM

Email ThisBlogThis!Share to TwitterShare to FacebookShare to Pinterest
Labels: MLA's Facebook management catches the attention of the BC Liberals