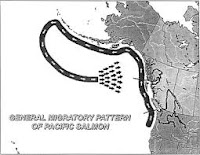 The long running streak of hot weather through May, June and into July is providing for a bit more attention at the offices of the Department of Fisheries and Oceans, as scientists and officials keep watch on British Columbia river conditions heading into the key salmon runs ahead.

Over the weekend, concerns were raised about the potential impact of the hot weather on the Fraser River Run, which while not considered at a crisis point yet, is still something that officials are focused on.

Last week we outlined some of the concerns that UFAWU's Joy Thorkelson had presented to City Council on Monday evening, as the Prince Rupert City Councillor recounted the situation in the Nass River and offered up her thoughts on what the salmon season might look like for Prince Rupert if things don't improve over the next month or so.

Her concerns on the North Coast Fishery came a few days after fishermen in Southeast Alaska offered up their own thoughts on the status of the Alaska fishery for 2015, with the focus on the Southeast fleet directed towards what they fear will be decisions announced from the Pacific Salmon Commission.

DFO has not provided any comment yet when it comes to the overview for the Fraser, or Skeena fishery for the summer ahead and beyond for that matter.  Those looking to track the day to day announcements from DFO, can find Updated Fishery notices for British Columbia available on the DFO website here.

However the topic of the salmon fishery and its future has made for a fair bit of commentary and review from media over the last few weeks.

More items on fishing on the North Coast can be found on our archive page
Posted by . at 9:55 AM

Email ThisBlogThis!Share to TwitterShare to FacebookShare to Pinterest
Labels: Hot weather may have impact on 2015 Fishing season