The success of the Fairview Container Terminal has so impressed officials of Canadian National Railway, that they will be taking the concept in place in Prince Rupert to their facilities in the deep south of the United States.

One month ago Canadian National and the Alabama State Port Authority, along with APM Terminals in Mobile signed a memorandum of agreement for development of the Mobile inter modal Gateway Project.

A project that CN notes will provide a third coast for the railway which crosses Canada and now reaches the Gulf Coast of the Deep South. The addition of Mobile to the CN Rail map will mean that the railway will soon be operating some 32,000 kilometres of track across North America.

The blue print for Port development in Mobile will be one rather familiar to those working at Fairview Terminal at Prince Prince Rupert's waterfront, with CN looking to make the same seamless transition from ship to rail as part of their Alabama plans, which will see the new gateway increase its capacity by some 90 percent. 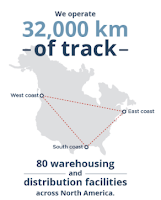 In an interview with the Journal of Commerce, CN officials outlined how their experiences in Prince Rupert have provided them with the confidence that the model they have in place on the North
Coast of British Columbia will prove to be just the kind of project that will make their Mobile plans a success.

To highlight just how successful their shipments to and from Prince Rupert have been, the expansion plan into the Gulf Coast is being called the Prince Rupert Model.

Highlighted by a significantly lower dwell time than many other terminals in North America, with goods unloaded in Prince Rupert on their way into the US Midwest within 100 hours of arrival at the Fairview Dock.

It's the through the work of those working at Fairview Terminal and along the CN lines east and south that the volumes through the Port of Prince Rupert have increased since the terminal shifted from its break bulk use to its dedicated use as a container terminal in 2007.

Shipments through the Mobile terminal will use CN's network into Chicago and beyond as well, leaving the Railroad confident that within five years, Mobile will be following much the same path as Prince Rupert has when it comes to on time delivery and reputation.

CN is not stopping its expansion plans with Alabama, the railway also recently signed an agreement with the Port of New Orleans to develop greater supply efficiencies through that southern gateway as well.

The 36 million dollar project in Alabama is expected to be completed in 2016.

A look at the Prince Rupert blue print in motion can be found from this video overview from CN.

More background on developments at both the Port of Prince Rupert's Fairview Terminal and with Canadian National can be reviewed from our archive pages below:

Email ThisBlogThis!Share to TwitterShare to FacebookShare to Pinterest
Labels: CN to use Prince Rupert model for Alabama expansioMobile