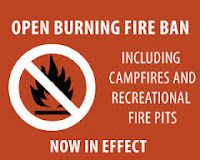 Those looking forward to a weekend around the backyard fire pit can stock up the wood, the ban of open fires, camp fires and fire pits for the City of Prince Rupert was lifted earlier this week, aided by the recent arrival of cooler and wetter weather.

This weeks rainfall and cool conditions has reduced the risk to the Northwest as a matter of fact, with campfire bans also lifted in Terrace and Smithers to the east, as well as on Haida Gwaii to the west.

The unusual notice for the North Coast of a Fire Ban was first posted on July 7th following the City Council session the previous night.

According to a Notice posted to the City website, the ban was lifted on Monday, making for a stretch of seven days for something from the North Coast's "You won't believe this, But ... "  files.

Mother Nature however isn't quite ready to lay in the hot summer nights around the fire just yet, the forecast for much of the weekend calls for clouds and showers with a break on Sunday for some sunshine. More rain however is anticipated into next week.

You can find more information on the Wildfire situation across the province from the BC Wildfire Service website.