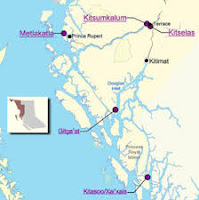 A number of North Cost First Nation communities are banding together to address environmental concerns related to proposed LNG development in the region, forming under the collective name of the Tsimshian Environmental Stewardship Authority.

The announcement of the new initiative on the North coast was delivered through an open letter to members of the Metlakatla, Kitselas, Gitxaala, Kitsumkalum and Gitga'at First Nations, with the group looking to show unity on the issue to provide for a stronger voice on environmental issues.

And while considered supportive of LNG development in the region, the mandate of the new First Nations group is to overview proposed LNG projects in the area to assess any long term impacts that they may have.

Over the course of the last six months, Petronas/Pacific NorthWest LNG have signed a number of benefit agreements with local First nations.

In their letter announcing the formation of the new authority, the current members of  TESA outlined how they were looking forward to engaging with not only the Lax Kw'alaams on issues of the environment, but to also work with the Province of British Columbia, Government of Canada and the individual proponents of LNG development in the region on environmental concerns as well.

Also of note from the group of five initial signatories to the Stewardship group, is that of the Gitga'at Nation, as we outlined on the blog on Monday, that First Nation is currently in the process of taking its concerns to the British Columbia Supreme Court, seeking a judicial review of the issue of consultation by the Province of British Columbia when it comes to the Petronas proposal.

Update: a media release from the Metlakatla First Nation provided some further details on some of the initatives the new Authority will take on.

Included in those duties are:

Strengthening oversight of federal and provincial environmental assessment processes, by supporting the engagement of our First Nations in these processes

All five leaders of the communities involved provided short thoughts on what they hoped to achieve with the  Stewardship Authority, with Metlakatla Chief Harold Leighton noting the collective aspect of the process.

"By coming together, we, as Tsimshian people, will speak with a stronger voice on all major projects and their cumulative impacts.”

More background on the formation of the new Stewardship authority can be found below:

(Note: the item above has been updated from its original form to reflect the added information related to the scope of the Stewardship Mandate)
Posted by . at 11:29 AM