The hum of machinery makes for the sound of business on the Prince Rupert waterfront and container trucks continue to roll through the downtown core,.

That after a short lived lockout by the British Columbia Maritime Employers Association came to an end by mid-morning, with all night bargaining delivering a tentative deal between the BCMEA and ILWU members up and down the coast of British Columbia.

Locally Prince Rupert workers reported for work for the 8AM shift at Fairvew as normal and by late  morning Container trucks were lined up outside the Scott Road Gate waiting for their entry as word of the lifting of the lockout spread.

The giant cranes that lift containers on and off the vessels began to ramp up their efforts significantly by about mid afternoon when the noise from the waterfront indicated that operations were well underway to work the Gerda Maersk which is scheduled to depart Prince Rupert later today.

The notice of success at the bargaining table came through a range of methods including social media, with the ILWU noting that no terms of the tentative deal will be released until the tentative agreement is voted on by ILWU members. 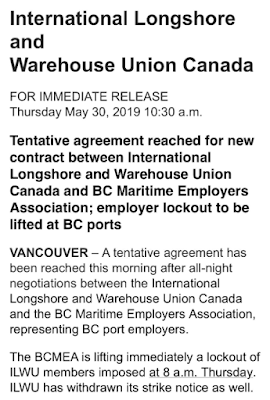 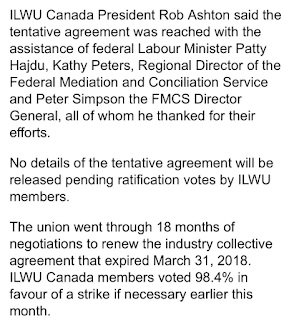 Patty Hajdu, the Federal Minister of Employment, Workforce Development and Labour also issued a statement related to today's announcement saof labour peace on the BC waterfront, noting the involvement of mediators from the Federal Mediation and Conciliation Service.

Should the deal be ratified by union workers, indications from Vancouver where the negotiations took  place suggest that the deal will signify a positive long-term outlook for operations at the BCMEA operated terminals.

For more notes related to the labour dispute see our archive page here, a wider overview of Port related news can be found from our Port of Prince Rupert Archive page here.

To return to the most recent blog posting of the day, click here.
Posted by . at 3:50 PM