BCUC investigation into gas prices set to get underway

“The rapid increase in gas prices in B.C. is alarming, increasingly out of line with the rest of Canada, and people in B.C. deserve answers. We asked the BCUC to conduct a fair, transparent and comprehensive independent investigation. These terms provide the broad reach it needs to find answers and give recommendations to inform the path forward.”--Premier John Horgan May 2019

With the price of gasoline in British Columbia continuing on an upward trajectory of late, Premier John Horgan has tasked the British Columbia Utilities Commission, which normally puts its focus on Hydro and natural gas deliver issues,  to investigate what is making for the spike in the price at the pump and to report back with their findings to the Legislature.

Yesterday as part of the next step when it comes to the Premier's interest in the price of gas, the BC Government outlined the terms of reference related to the BCUC investigation, among the highlights are:

Investigate gasoline price fluctuations, including the extent of possible competition concerns, such as price fixing and gouging

Explain the difference in refining margins between British Columbia and the rest of Canada, including why in recent months refining margins for Vancouver were more than double the Canadian average

Review the potential of regulatory measures used in other jurisdictions across Canada and North America to enhance transparency about how prices are determined.

The May 21st announcement which you can review here included the Premier's letter (see below) to the BCUC requesting the investigation. 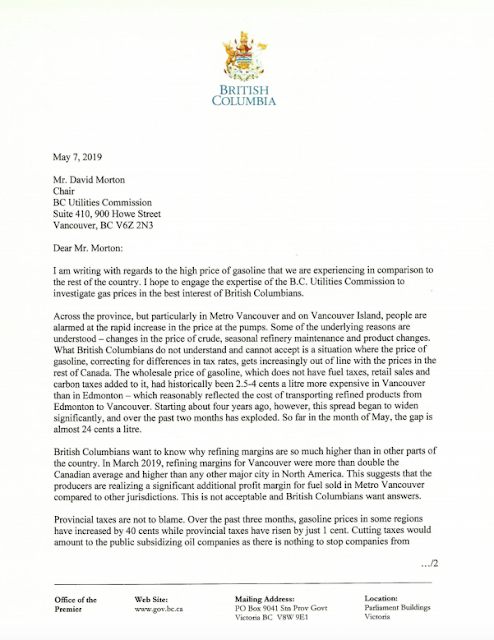 The deadline for the BCUC to deliver their report ins August 30th.

The price of gas has reached the 1.70 per litre level in some Lower Mainland communities over the last week, for Prince Rupert today's price mark was listed as 1.46 per litre as of the noon hour.

For more items of interest on issues of Transportation along the area highways see our archive here.

More notes on provincial government themes can be found from our Legislature Archive as well as from our Victoria Viewpoints feature on the D'Arcy McGee blog.

To return to the most recent blog posting of the day, click here.
Posted by . at 3:45 PM

Email ThisBlogThis!Share to TwitterShare to FacebookShare to Pinterest
Labels: BCUC to review gas pricing in BC