When it comes to concerns over any threat of Tsunami, Prince Rupert residents should keep watch to the North but rest easy for the most part, with the city described as in a good position to deal with any form of Tsunami issues that may arise.

Those findings and much more were provided to Prince Rupert City Council on Monday evening, as the city's six councillors (Mayor Brain was absent on the night) received a report on the Risk from Tsunami to the region.

Two of the reports four authors were on hand to deliver their findings. which was funded through the National Disaster Mitigation program with a range of objectives in mind.

When it came to the overall review the pair noted how the City is susceptible to seismic tsunamis from the pacific Ocean, as well as conceivably from local landslides, the study objectives included: identification of seismic and landslide hazards, flood modelling, an analysis of hazard, risk and vulnerability as well as to incorporate the findings into emergency preparedness planning and response initiatives. 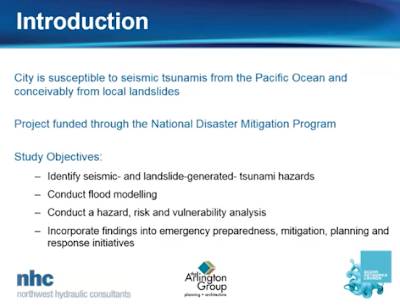 Dividing up their work on the review for council were Phillipe St. Germain and Graham Farsta, who explored the nature of the tsunami threat and the risk factors that the City should keep in mind as a result of such seismic events.

Mr. St. Germain outlined the difference in nature of tsunami generated by both seismic activity and those of landslide, providing some past examples of both elements of note.

He did note that from their analysis there was no evidence of slope instability located near Prince Rupert.

When it comes to seismic related tsunami, the Prince Rupert area should view those events arriving from the north and the Aleutian-Alaska region as more of a concern, than those of the Cascadia subduction zone located to the south. 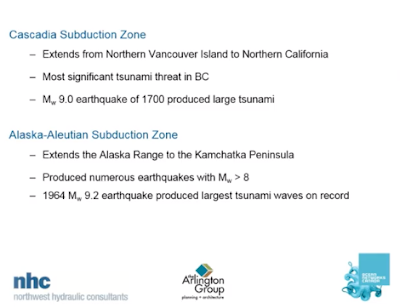 Even with those tsunami events from the north, the expected rise in water for the Prince Rupert area is not considered particularly high or of concern, with the Tuck Inlet area the one body of local water that may notice the most impact of water level increase, while Hays and Seal Cove would see the most impact locally.

When it comes to water velocity generated by a seismic event, the most impact would be found in the narrow water passage of the Digby Island Ferry which would see an increase of 6 knots in flow. 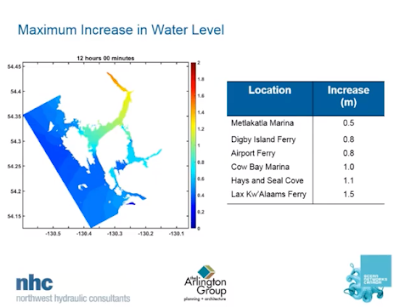 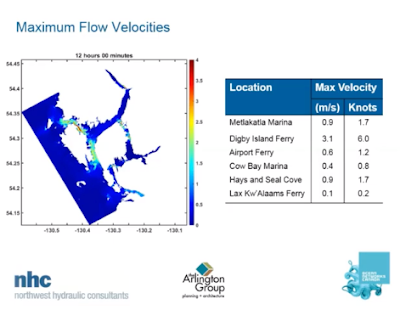 Mr. Farsta took over for the Risk Assessment of the study review, and in that they had good news for the community, noting that from the study, the City of Prince Rupert overall fared well when it comes to any risk from any tsunami event. 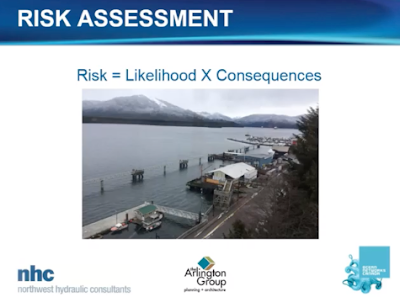 Among those findings, Mr. Farsta reinforced the more likelihood of risk from the Aleutian-Alaskan which had a higher risk factor than the Cascadia potential.

It was noted that all of the city's emergency facilities were in locations that would have no impact of tsunami risk, as all are above or away from where any tsunami may arrive, the same was said for the city's residential areas, the downtown area and the city's infrastructure, including the Prince Rupert Airport and Highway 16 leading out of town. 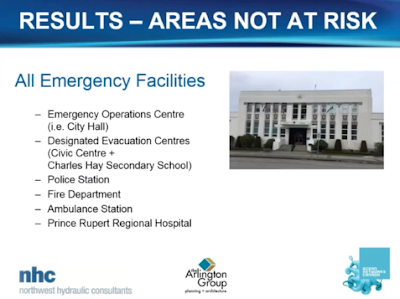 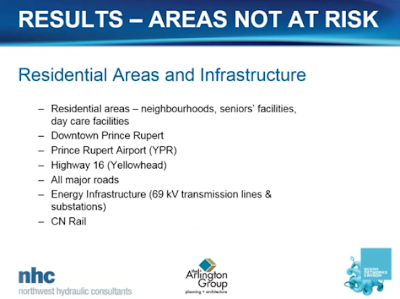 It was also noted how the CN Rail infrastructure rings the city and that the height of the railway is well above the risk factor for any impact of tsunami. The city's hydro infrastructure is also considered to be well out of any potential danger areas.

Some areas of risk, though mostly low in nature included, the Digby Island Ferry terminal which is susceptible to the water velocity concerns, also of note were the city's marinas, the municipal water supply and the Cow Bay area of the city. 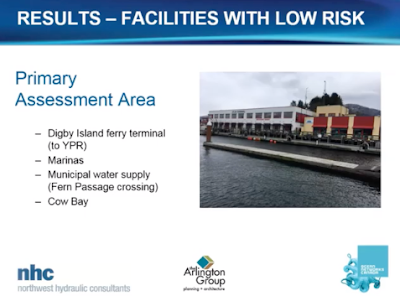 When it comes to Prince Rupert Port Authority Facilities, all bulk terminal facilities are located well above any potential risk with the exception of the off loading into the ocean which cannot be avoided.

Fairview Terminal is 3 metres plus above the highest potential level of risk and its design would also serve to channel it away from the risk, the two ferry terminals would have a low risk owing to water velocity, the Port Edward Harbour facilities are at risk as they are at sea level.

There is some risk but still considered low for Lax Kw'alaams, Digby Island rural areas and Port Edward, though that community's risk was considered very low. 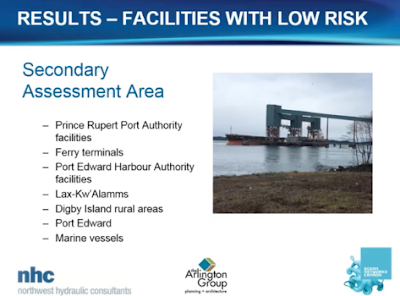 As for recommendations, they recommended that the details from the report be added to some of the city's documentation. They also outlined the need to upgrade the communications plan, evacuation signage and Waterfront evacuation procedures.

They also observed how much of the provincial emergency preparation work is focus on the Cascadia area and they noted that it was something that could be brought to the attention of the province to also include the risk to the North Coast posed by the Alaska-Aleutian area.

A review of evacuation overview was suggested as well, with Mr. Farsta noting that as most of the city's residential areas and other key sections of the city are all well above any tsunami risk, there would be no real need for any form of evacuation of the city should a tsunami take place. 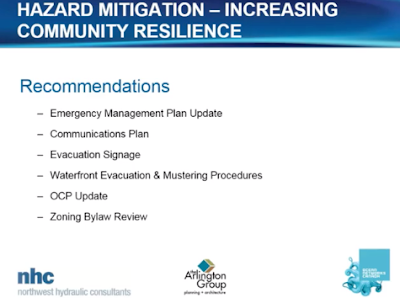 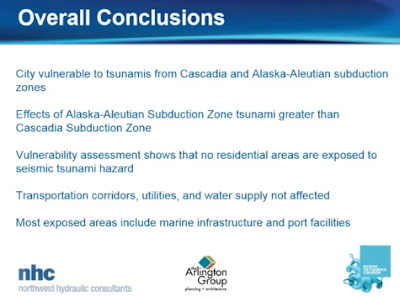 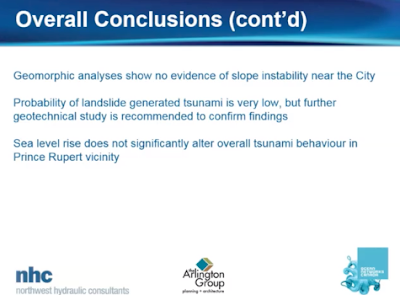 As for questions of the pair from Council, Councillor Niesh offered his thanks and made a few observations, while Councillor Cunningham inquired as to what impact the 1964 Alaska earthquake would have had on Prince Rupert, the authors noted that they did not have any information on that event and would have to study that past event further to offer an opinion.

Mr. Cunningham also offered some comments related to the velocity issues and observed how it most likely would not be a very significant situation.  He also recounted the most recent large quake off of Haida Gwaii and how it had little impact on the community.

You can review the full presentation to Council from the City's Video Archive starting at the twenty eight minute mark of the evening's proceedigns.


Find out more about planning for tsunami threats from the links below:

A wider overview of Council discussion themes can be explored here.

Our archive of past seismic events in British Columbia and Alaska can be found here.