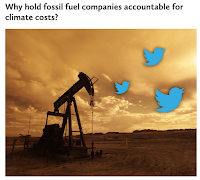 North Coast Regional District is beginning to get some responses to a letter writing campaign launched earlier this year, which provided  for the concerns of the Regional body related to climate change.

The response is a follow up to correspondences that the Board members had delivered to CEO's of energy producing companies in Canada and around the world.

As we outlined on the blog earlier this year, North Coast Regional District was one of a number of local governments in the province to sign onto to the climate change letter concept, a call for action that came from the West Coast Environmental Law Group.

At their meetings of January 25 and 26, the members of the Regional District Board voted to support the resolution that would see the Board author climate accountability correspondences to twenty of the largest fossil fuel companies in the world.

The North Coast Regional District correspondences to the CEO's of the targeted companies called attention to the creation of pollution by the use of their products that their companies produce and the expenses that are incurred by municipalities.

The two page letter, signed by NCRD Chair Barry Pages, notes that the companies in question "cannot make billions of dollars in corporate profit, knowing that the sale of your products is causing significant economic hardship to communities around the world, and not expect to pay a fair share of the costs outlined above"

In the case of the NCRD, the letter that was mailed out to energy companies looked as follows: 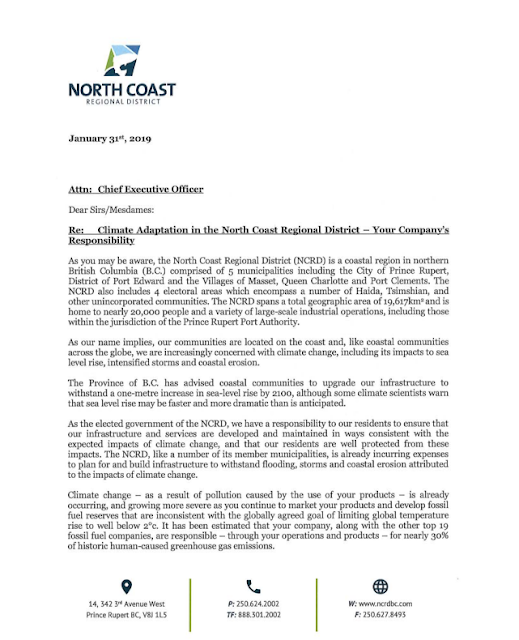 So far, the Regional District has shared the results of their letter writing efforts, with Regional District  providing a copy of a letter from Australian Industrial mining and petroleum giant BHP, including it on the NCRD website this week.

As part of their reply to the NCRD letter,  BHP makes note of their commitment to climate change issues and directs Regional District members to review some of their work on the file

(you can review those notes here)

The members of the North Coast Regional District haven't made their letter writing campaign much of a public affair, sharing little news of their efforts since their January decision to move forward with the plan.

As well, neither Mayor Lee Brain or Councillor Barry Cunningham, who are the Prince Rupert representatives on the Regional Board, brought forward any information on the initiative through the monthly public sessions of Prince Rupert City Council, nor do we have any idea as to whether the NCRD move is universally endorsed by the Prince Rupert Council members.

The topic of West Coast Environmental Law and its larger plan to sue energy companies was actually the focus for part of the recent NCLGA meeting attended by Mayor Brain and Councillor Cunningham, though neither made mention of those discussion as part of their review of the convention earlier this week.

At the Williams Lake convention, Mayor Lori Ackerman spoke out against the West Coast Environmental  Law campaign, observing how in her opinion it was divisive and how suing the energy companies was an inappropriate path to follow when looking to reduce emissions.

As part of their attendance at the convention, Ms. Ackerman and her community of Fort St. John had submitted a resolution  that called plans for potential lawsuits as inappropriate.

That resolution was taken note of by the West Coast Environmental Law group earlier this month.

So far, it does not appear that North Coast Regional District is following up on the larger law suit approach, content it seems to keep to the letter writing campaign for now.

To return to the most recent blog posting of the day, click here.
Posted by . at 12:33 PM