Just like that! The shiny bauble of yesterday can become the discarded toy for tomorrow ... ask the Recreation Department


It's a tale right out of the movie Toy Story, with the City of Prince Rupert clearing out the once upon a time out door exercise area directly in front of the Civic Centre.

Much like the once popular toys of the past get put aside in an old box, the equipment from the city's Green Gym recreation site has now been tossed to the back of the city's recreation complex, piled up to the side awaiting perhaps faces an even worse fate.

Though to be fair to the City and its recreation department, the era of outdoor participatory workouts never really did become that popular in Prince Rupert, a location where the usual weather patterns tend to dissuade one from a lengthy outdoor workout.

So far, the City of Prince Rupert has not posted any public notice to the wide range of information portals that it operates to indicate the details of the decision.

A number of media outlets have noted that the reason behind the closure of the outdoor gym was a less than positive inspection which had indicated that significant repair and maintenance was required for the equipment, something that the city did not wish to take on.

There has also been no mention of the equipment, or any decision to remove it from the recreation centre from any of the member of City Council. 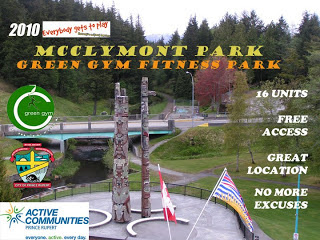 The outdoor gym was introduced to the community in October of 2009, making its debut at the start of the region's rainy season and the elements did tend to have an impact on its usage over the years, with the sixteen pieces of equipment more or less morphing into a playground as time moved forward, something that may have been an indication that the city might have required a few more playgrounds for the youth around the city.

As we took note of last year on the blog, the site had seen its use decline since the early days of its launch, with the original use as an exercise area more or less abandoned, the park  itself note even destined to celebrate its tenth anniversary. 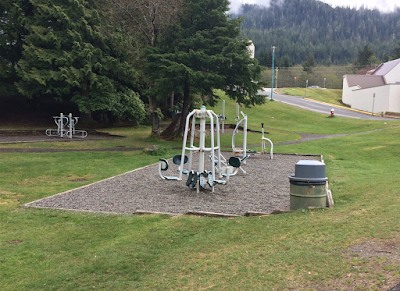 The project which was officially known as the McClymont Park Green Gym Fitness Park was initiated by then Recreation Director Michael Curnes, who brought the concept to town as part of the city's commitment towards Active Communities.

Mr. Curnes himself didn't have much time to get in any workouts at the new outdoor gym, he changed jobs in the spring of 2010, leaving the city to move to Northern Health, before eventually moving away from the community.

The city has provided no indication as of yet whether they have any other plans for the former location of the Fitness Park, or if the area will just be returned to its once former status as a grassy part of the landscape of the Recreation complex.

For more items of note from the City of Prince Rupert see our archive page here.

To return to the most recent blog posting of the day, click here.
Posted by . at 1:04 PM