The familiar regular transportation connection between the city and the Digby Island Airport is about to make its return home from refit, with the Airport Ferry set to depart from the Point Hope Shipyard in Victoria for the 535 nautical mile journey to it's berth at Fairview Harbour.

At a decent cruising speed, the average time of transit is roughly 76 and a half hours.

North Coast MLA Jennifer Rice played the role of ship spotter for us yesterday, using her Social Media feed to share her snapshot of the iconic blue and black colours of the vessel as well as a link to follow the journey home. 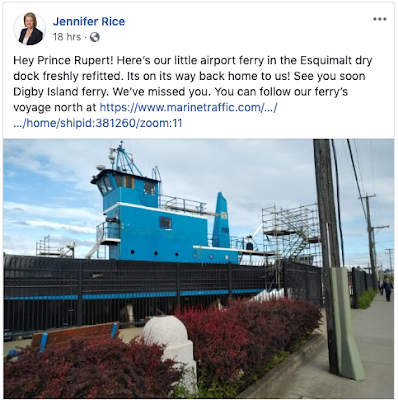 You can track the progress of the Airport Ferry from the Marine Traffic website here, type Digby Island Ferry into the search engine to access more details about the vessel.

The Airport Ferry has been at the Victoria shipyard undergoing its annual refit for the last two months, originally anticipated to be returned to service at the end of April, the extra few weeks were required after additional work was required to address some unexpected items that had been discovered once the vessel was out of the water.

During the course of the Airport Ferry's working vacation in Victoria, the City has been using a tug and Barge Service provided by Wainwright Marine, which has picked up the slack for the Airport Ferry during its absence.

The last estimate for the cost of the refit and the tug and barge service had been closing in on the one million dollar mark when the City's CFO provided her last update in early April.  Council members will get an idea as to the final amount for the refit work at a future council session.

With the Digby Island Ferry soon to be back in service, it's return will coincide with the introduction of Air Canada's new Q400 service to the city, with the newer aircraft set to replace the familiar Dash 8 service that has been the mainstay of travel for decades on the North Coast.

The New Air Canada craft is to makes its first journey to the city on June 1st.

To return to the most recent blog posting of the day, click here.
Posted by . at 3:28 PM