Greetings from City Hall to your door this week; as Prince Rupert Property Tax Bills arrive

The final calculation for the city's tax rate for 2019 by City Council  came following a number of public engagement opportunities, council workshop sessions, as well as the final valuations delivered by the British Columbia Assessment Agency.

With the City's Chief Financial Officer Corinne Bomben declaring a Budget surplus early in the budget process, Council wrapped up their final deliberations on the taxation levels for the year by mid April.

As the tax notices arrive, if the North Coast Review home office tax bill makes for the final word on taxation for the year, then the two percent reduction translates to around 13 dollars in savings from the tax bill of last year.

Depending on your property assessment for this year your savings will be different. 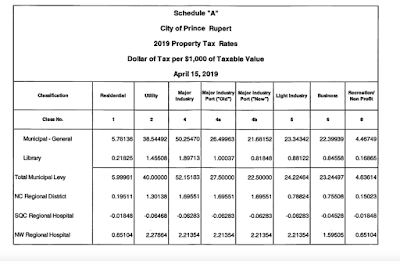 In addition to the reduction in your tax bill for this year, the city will be putting some of that budget surplus towards future debt repayment for the proposed new RCMP detachment.

Council also increased staffing levels for the detachment by two members for this year, as well as to hire an additional bylaw officer to staff.

The deadline for taxes for 2019 is Tuesday July 2nd, which should serve to reduce any lingering afterglow from the Canada Day celebrations of the day before. 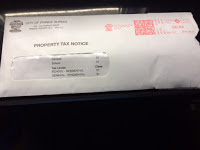 As it has in recent years, the Call for the tax revenue came along with some fireside chat notes from the Mayor, with Mr. Brain making note of a number of themes for this years missive.

The correspondence shares the Mayor's thoughts on how the community has turned a corner and continues on with a number of initiatives to move Prince Rupert into the future.

He highlights two infrastructure projects for this year, with the city having secured partial funding for the second phase of their water project planning, with the Mayor making note of plans for the construction of the water dam at Woodworth Lake.

In his update, Mr. Brain does not offer a timeline for that project, simply stating that it  is anticipated to start this year. 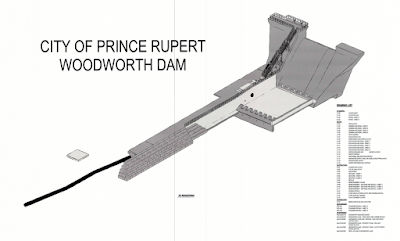 Mayor Brain also outlines how the city is working to raise funds for the third and final phase of their water infrastructure replacement program, that being a water treatment facility and replacement of one of the submarine water lines.

Also mentioned is the start of work for the LPG Terminal on Watson Island by Pembina, with the Mayor making note of how the lease payments are helping to fund the city's portion of the water dam replacement project as well as other investments. 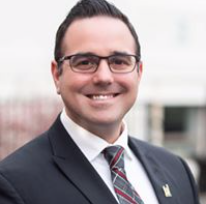 Mr. Brain also observes as to how leasing municipally owned industrial properties is making for diversification and stability for the city's revenue streams.

The call for tax cap relief on Port properties from the province is once again issued, as well as the work of the Northwest Resource Benefits Alliance and the success found so far from their efforts for the region.

Not mentioned this time around however was the city's ongoing dispute with Port Edward over the Ridley Island Tax Sharing agreement, an item that has been of much interest in past tax time correspondences between the Mayor and the city's residents, and a topic that City Council has not discussed in public much in recent months.


The tax bill also provides a sneak preview of the Annual Report, celebrating some of the recent work by the city including the creation of the dog park on McKay, a Kayak launch at the Cow Bay Dock and the second phase of the City's water project.

The full Annual Report document will be delivered to City Council at an upcoming Council session and then posted to the City Website.


The May overview also includes a reminder that in addition to the finances required for their own use, the City of Prince Rupert collects taxes on behalf of a number of different taxing agencies.

The information mailer also provides a breakdown for the taxpayer as to where all of your tax dollars go.

The accompanying graphic indicates that Police and Fire protection services account for the bulk of the budget at 24 and 15 percent respectively, Recreation takes a 12 percent bite from the taxation apple, followed by the Roads budget at 11% something which might raise an eyebrow or two from motorists who make the bone jarring ride around the roadways of the city.

The remaining elements of municipal governance make for single digit allocations from the full pot of cash.


The 2019 Budget was formally approved at a Special session of Council in April, when Prince Rupert City Council brought their budget process to an end noting of the slight reduction in taxes for this year.

Of note for the year ahead beyond the tax reduction,  came an increase to the salary structure for the Mayor and Council members.

The first call for taxation revenue came in February when residents received their Utility Bill notices for 2019, which included  rate increases for the Water, Sewer and Garbage elements of the municipal billing.

You can review the City Council budget process that led to the final word on property taxation from our archive page here.

To return to the most recent blog posting of the day, click here.
Posted by . at 10:11 AM

Email ThisBlogThis!Share to TwitterShare to FacebookShare to Pinterest
Labels: Tax Notices for 2019 arrive