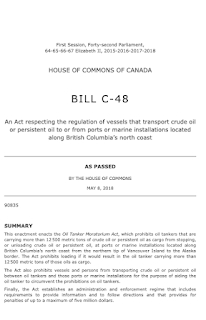 Skeena-Bulkley Valley MP Nathan Cullen took a multi-media approach towards his concern over the recent twist in the deliver of his long sought Oil Tanker Ban for the North Coast, a proposed bit of legislation that may be in some peril, depending on the next step ahead for the Senate which has been reviewing the legislation for a number of months now.

Thursday Mr. Cullen issued a statement through his constituency website, outlining his concerns over the Senate actions and what they may mean for the legislation that had been forwarded to the Upper Chamber by the elected members of the House of Commons.

Towards his theme, the MP for Skeena-Bulkley Valley cited both judicial precedent and the comments of Canada's First Prime Minister Sir John A Macdonald to make his points.

“It would be almost unprecedented for the Senate to defeat or attempt to kill through delay government legislation passed by the House of Commons. The Supreme Court of Canada has told us that the Senate is there “to revise, not defeat” government bills and John A MacDonald told us “the Senate should not find itself in opposition to the government”

Calling for the Senate to respect the democratic commitments that governance provides for; the MP also suggested this may be a pivotal moment for both the Senate and the North Coast.

“Canadians believe in the essential promise of democracy. That parties make commitments in elections and then implement those changes. This bill and its potential defeat have become a test case for this ‘new’ Senate and for this government. Failure will mean that the North Coast of BC will remain threatened by an oil spill, which would devastate the incredible diversity of the Great Bear Rainforest and the ocean that Indigenous and coastal communities depend on for their livelihoods”.

Mr. Cullen also spoke to the issue in a press scrum and reiterated many of his themes as to how the evolving situation will make for a test case for the Senate and their recent moves should be troubling for all Canadians.


Also weighing into the debate yesterday over the Senate's move was North Coast MLA Jennifer Rice, who like Mr. Cullen shared her comments and disappointment in the decision through Social media.

Her testimony, like that of Mr. Cullen, Mayor Lee Brain, Mayor John Helin of Lax Kw'alaams and numerous other participants in the Prince Rupert and Terrace Senate Committee hearings can be found as part of the links we included in our account of the Senate's decision of yesterday.

The Western Coast Environmental Law group provided a statement on the issue as well as providing for a compilation of what a number of other groups and individuals had to say about the moves. With the WCEL calling on the "unelected Senate" to honour the government commitment to a BC North Coast Oil Tanker Ban.

Included as part of their statement for the Senate to act, were comments from Joy Thorkelson President of UFAWU-UNIFOR and Des Nobels the Chair of Friends of Wild Salmon.

“The Senate is on the brink of directly disregarding a key promise of the federal government and abandoning an important commitment to protect the ocean-based economy of BC’s north coast. We and countless others have spent years supporting the intent of this bill through democratic channels. I want the Senate to know that, in a democracy, I am not okay with our decades of efforts to secure this protection being sacrificed at the stroke of the Senate’s pen. It’s time to pass Bill C-48.” . -- Joy Thorkelson, President of United Fishermen and Allied Workers’ Union – UNIFOR

“The Oil Tanker Moratorium Act was an election promise that helped the government get elected, and it was passed over a year ago by the democratically-elected House of Commons,” “It’s not acceptable that, after dragging its feet on this bill, the Senate is now considering rejecting the bill at the eleventh hour.” -- Des Nobels, Chair of Friends of Wild Salmon 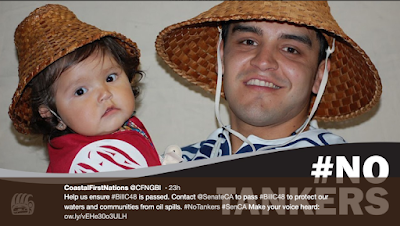 Coastal First Nations have also made their voices heard, spreading their message through a number of social media avenues and issuing their call to ensure that the Bill moves forward out of the Senate.

More notes on the Senate Committee decision can be explored from our House of Commons archive as well as from our political blog D'Arcy McGee.

To return to the most recent blog posting of the day, click here.
Posted by . at 9:03 AM

Email ThisBlogThis!Share to TwitterShare to FacebookShare to Pinterest
Labels: Cullen, Rice and others on Bill C48 troubles