City of Prince Rupert work crews made quick work to repairs of a significant waterline break that appeared over the weekend along 11th Avenue East, a disruption in the water supply that affected a good portion of the residences and businesses found along the 200 to 300 block of the major east-west thoroughfare.

The water began to gurgle up through the pavement over the weekend with city crews setting up road blocks around the perimeter of the break, city workers were on site Monday and had the repairs in place by mid afternoon, returning the water service to the affected areas and allowing for the return of two way travel on the roadway.

The city of Prince Rupert used its Facebook page to alert residents of the issues, though the information flow, like that of the water on 11th was somewhat limited for city residents, with no advisory provided through the city's official website or that of its mobile app. 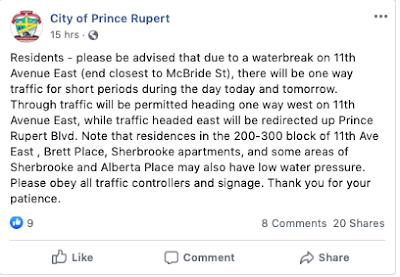 The Eleventh Avenue East break is just the latest of water issues that the city has had to deal with in recent months, with the city's aging infrastructure continuing to make for challenges for the city's Operations Department.

You can review more of the city's infrastructure plans from our archive page here.


To return to the most recent blog posting of the day, click here.
Posted by . at 10:54 AM