For the first time in many months, it's a case of an almost full roster for all of the North Coast media outlets 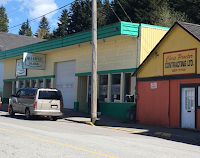 Prince Rupert and area can finally expect some full coverage of local events for the next little while, with the city's three main media sources now finally at full staff, something that has been a rare thing in recent months, with the weekly paper in particular resembling the band Fleetwood Mac when it came to an ever changing roster.

This week, the Northern View has introduced us to their newest reporter, Jenna Cocullo, who arrived in mid May and will join the legion of boisterous Habs fans in the community, able to wear her Rouge, Blanc et Bleu with authenticity by way of her home base of Montreal.

She makes for the latest reporter to join the paper from the Masters of journalism program at Carleton University in Ottawa, Ontario.

You can review her "hi, pleased to meet you" entry for the paper here.

Her notes already put Ms. Cocullo on the path to longevity, as compared to reporter Gareth Millroy  a two month vet most recently on staff and a rotation of others who have come and gone over the last few months before readers could really get to  know them.

Waiting in the wings for Editor Shannon Lough to let him tell his story, is Alex Kurial, who also arrived this month and has made it as far as the photo array on page A6 of the paper, but has yet to offer up some details on how his travels brought him to the North Coast.

With the paper back to full strength, there is almost a sizeable chapter of a Media Club now found on the North Coast, with the CBC and TV 7 also fully staffed in Prince Rupert.

Something which should make for lively Friday evening's at the Wheelhouse Brewing Company, which seems to serve as the brew house of choice for local media these days.

However, a note from the Bell Media listings suggests that yet more change is ahead for the local scene, with a new morning announcer seemingly set to be revealed at Prince Rupert's EZ Rock Atlin Terminal studios.

For more items of note on the local media scene see our archive page here.

To return to the most recent blog posting of the day, click here.
Posted by . at 3:26 PM