Skeena MLA Ellis Ross had opportunity to take a range of topics to the Premier on the final day of the Spring session Thursday, framing much of his early commentary on the issues related to the natural gas pipeline through the territory of the Wet'suwet'en and the appointment of soon to be retiring Member of Parliament Murray Rankin, as the provincial government's emissary when it comes to provincial engagement in the area.

But my concern is the initial process that took over 15 years to accomplish with a law-abiding company that actually achieved all of its certificates, all of its permits and actually carried out the principles of case law, as far as I could tell, to a T.

That's how we got unanimous consent from all of the band councils — elected band leaders from Prince George to Kitimat and even further down the channel.

I'm trying to understand the process that Murray Rankin is actually leading as your emissary.

What is the objective in relation to the pipeline blockade, if any? 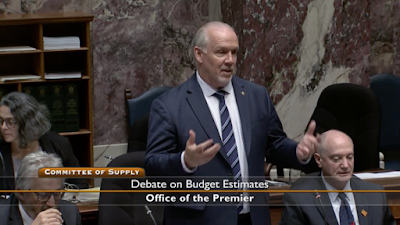 In reply to the line of questions, the Premier noted how engagement continued with both the province and Federal government on addressing the issues in the area.

Again, I thank the member for his questions. They come from a place of deep understanding, and I appreciate that. I acknowledge that, dealing with what has been re-emerging as the long-standing traditional decision-making and governance processes within Indigenous communities, particularly the Wet'suwet'en.

At the same time, two orders of government, the federal and provincial governments, are working on addressing reconciliation in a genuine way, addressing rights and title as defined by Delgamuukw and also living under the Indian Act band council model. It's not an easy thing, and the member knows this, because he's experienced it firsthand.

Mr. Ross also offered up some of his own thoughts on reconciliation and asked to what actions the province may take when it comes to ongoing concerns over a blockade of the Coastal Gas Link project,

Reconciliation. I have a different term of reconciliation than most. I'm trying to close the gap in terms of standard of living. This is the very first opportunity in the history of Canada that we've been able to do this, ever since the fur trading days. So this is absolutely critical that we get this right. I understand the sensitivities.

But I also understand the principle of case law. It got us to this place in the first place. Now, the government is in a pretty awkward, sensitive situation, so I'll take that answer as no, this process under Murray Rankin has got has nothing to do with the blockade. I understand that the objective is mainly towards relationship-building and talking about Delgamuukw, in whatever form that might be.

Is it my understanding that, then, the Crown will not take any part in resolving the pipeline blockade and actually just leave that up to the company in question, CGL, well as the injunction?

For his part, the Premier noted that at this time, he saw no need for the province to take action at this time.

What we've been trying to do is do more than one thing at a time. We believe that the industrial activity that we all want to see that will flow from the CGL work and culminate with the creation of LNG Canada in Kitimat can and will be achieved in short order. It's happening right now.

I have no information that shows me that there's any challenges for CGL right now. It's a sensitive question. The member knows that. There will be points of conflict going forward, and we'll address those as they emerge. But as it stands right now, the injunction is being respected.

Beyond the focus on the specific issues related to the Coastal Gas Link pipeline and LNG Canada project for Kitimat, the Premier addressed a wider theme of Indigenous negotiations, a topic that Mr. Ross further explored during his time on Thursday.

Whatever decision the Crown comes to around title, if you choose to go down a road, it would have to be applied to 203 bands in B.C. This will be a precedent, because title has never been decided upon by the Crown. It's always been decided upon through treaty negotiations or through the courts.

Apart from that, it's always a vague conversation around development on territories where rights and title may be infringed. I understand that it's a complicated subject. A lot of people don't understand the concept of title. Many lawyers don't understand it, so I don't expect political leaders, as well as governmental staff, to truly understand what it means.

I've always settled for the idea to go to court to figure it out in the manner of Tsilhqot'in, for example, because I don't understand how it could play out unless the government is deciding to go down a road of discussion of title.

It's unfair for the First Nations to be put in a position where they have to defend the conversations they're having with government when the ink is dry. It's very unfair to put them in that position. And it's very unfair for non–First Nations not to understand what's happening with the land base or the fish and the animals and whatnot.

In fact, one of the principles of case law….. I will reiterate what your Attorney General said: that they will view rights and title through the lens of section 35 and the pursuant case law. Now, in terms of everything that I've heard from your ministers, that is the one statement I do agree with.

It actually provides a way out for the Crown as well as the First Nations. So I just want to know: what will be the process to keep the non–First Nations apprised of what's going on with the talks around the land and the animals and the rights and title associated with the Wet'suwet'en hereditary chiefs?

As a point of reference for the House Mr. Horgan highlighted how each Indigenous community has different aspirations when it comes to negotiations and  how they choose to engage with the government.

The member put a lot of stuff on the table. Firstly, with respect to Tsilhqot'in, title exists. There's a map. It exists. That has not led to a rush to the Supreme Court to determine maps in other parts of the province. The member knows Indigenous communities are not homogenous, even within territories. Challenges between the Nisga'a and the Lax Kw'alaams and the Metlakatla and, here in my territory, the Nuu-chah-nulth and the Coast Salish — this has been here predating the Indian Act. These challenges have existed for millennia.

The Premier also made note of past efforts to resolve rights and title by Liberal Premier Gordon Campbell and the lessons the NDP government learned from those days as they look to find what Mr. Horgan described as the way forward.

The former Premier, Premier Campbell, made a concerted effort to resolve some rights and title issues in one fell swoop. That was met with resistance from nations right around the province, so we learned a lesson from that as well. And I believe the course we are on now is a result of failed and successful exercises over many decades of Indigenous, non-Indigenous relationships with respect to the land, Crown-to-nation discussions, two orders of government — federal-provincial — as well as a multitude of nations throughout British Columbia. Hard work, and work that needs to be done — progress being made when leadership steps up in non-Indigenous and Indigenous communities and finds a way forward.

He made reference to the caribou question. I had a good exchange with the member for Peace River South in estimates. We talked about this, in some detail, in his community, as well as before I got there. It is difficult to put, in that case, West Moberly in soto in the position of having to defend their rights to talk to government about issues that are relevant in their territory.

But negotiating in public is also very difficult, so we have to find a way to ensure that all members of the community are included in the discussion so that we don't have that tension and acrimony between Indigenous and non-Indigenous.

We're doing our level best to try and find that way forward. It will be difficult. There will be points of friction within communities and outside of communities. But we want to do our level best to reduce that and make sure that everyone can realize their full potential on territories, in the case of Indigenous people that have been there for millennia, and also for those newcomers to British Columbia, who have been here for generations or even just for days. That's the nature of our dynamic community, and I'm very excited about the prospects going forward. I know that you are as well.

The full exchange between the Skeena MLA and the Premier is well worth a review as it provides a fair amount of background on the ongoing efforts towards reconciliation and negotiation across the Northwest.

You can review  the discussion from the minutes of the Thursday session here, starting at the  14:50 minute mark.

The video presentation of the House proceedings can be found here, with Mr. Ross's contributions and the Premier's replies again starting at the 2:52 point.

For more items of interest related to the work of Mr. Ross at the Legislature see our archive page here, a wider overview of Provincial issues can be found as part of our political blog D'Arcy McGee.


To return to the most recent blog posting of the day, click here.
Posted by . at 11:03 AM

Email ThisBlogThis!Share to TwitterShare to FacebookShare to Pinterest
Labels: Ellis Ross on reconciliation themes in the Northwest and pipeline progress