As Rogers Hometown Hockey gets closer, City of Prince Rupert is looking for a North Coast Superfan

As Prince Rupert prepares for its Rogers Sportsnet Close up on the weekend of December 7th and 8th, the City of Prince Rupert has launched a few initiatives to help build up on the enthusiasm in the community for the arrival of Hometown Hockey.

The most recent project, a call to Prince Rupert's hockey fans to show just far they will go to show that they are a Superfan of hockey.

On Friday, the City outlined the nature of the challenge offering a chance to go behind the scenes with the Rogers Hometown Hockey team on Saturday December 7th and pick up some swag along the way.

To participate, all you have to do is take a photo or make a video that explains why you are hockey's biggest fan and post it to Facebook, using the hashtags of #biggesthockeyfanpr #hometownhockey as well as @CityofPR and @Rogers 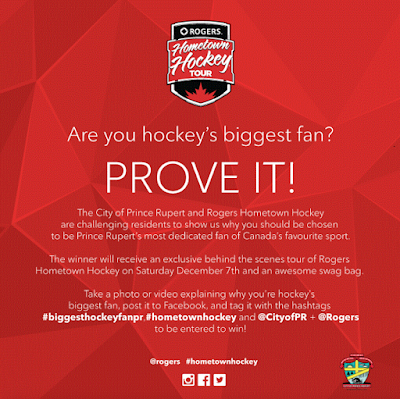 The fan participation challenge comes a couple of days after the city launched a similar program for local businesses, with the city looking for businesses and other organizations to decorate their windows in a Red and White theme to show off their Canadian spirit for the game.

Rogers brings Hometown Hockey to the city in the first week of December, which will also work nicely into the Winterfest celebrations in the city.

Anchoring the national broadcast on Sunday night will be Ron MacLean and Tara Slone, who will be looking at some of the rich hockey history in this community as they showcase the city to the nation as part of that night's Buffalo Sabres/Edmonton Oilers national broadcast.

A look at the city's plans for the event can be reviewed from the City of Prince Rupert Facebook page.

You can keep up with any of the notes in the lead up to the Hometown Hockey arrival from our archive page here.