If you have an education in health studies, the jobs are aplenty on the North Coast as Northern Health looks to fill a range of positions and openings in the Prince Rupert area, with the most recent listings of the available jobs totalling 37 from the online employment page from the Health authority for Northern British Columbia.

The shortages won't come as a surprise for many who have made a trip to the hospital and found short staffing has made for challenging times, with many of the positions still to be filled found in a number of nursing categories.

As well, anyone who has been up to the hospital for blood work or other lab related testing, they to have seen some of the impact.

That as what appears to be a staffing shortfall, seems to be affecting service delivery. With the Lab now in the second month of Wednesday closures, with no indication as to when the facility will return to five day-a-week service.

A snap shot of the job opportunities for today shows that 22 of the 37 positions listed as available are for nurses or nurse practitioners, with a range of other departments making up for the rest of the openings. 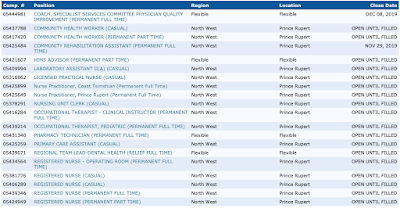 You can explore some of the challenges facing Northern Health across the region from their Careers section here, which provides a wider overview of just how many positions they have to fill across a vast portion of Northern British Columbia


As we noted earlier this week, Prince Rupert City Councillor Barry Cunningham has put some focus on health care in the community, calling for a collective approach for the region to put pressure on the provincial government to ensure that Prince Rupert and area does not fall behind on health care issues.

Mr. Cunningham made note of some of his concerns that the situation could become even worse in Prince Rupert, with Terrace set to see a new Major Northwest Trauma Centre in place to replace the aging Mills Memorial Hospital in the next few years.

And when you consider the large volume of positions that are still to be filled for Prince Rupert today, you can see why Mr. Cunningham has those concerns.

Particularly if a shiny, modern hospital will soon loom large on the horizon just ninety minutes down the road; ready to attract not only those working here, but to absorb many of the same talent that Prince Rupert is currently looking for.

The need for City Council, Regional District, Surrounding First Nation communities and the local MLA will be key to making sure the North Coast voice is heard.  With residents looking to all of them to become outspoken advocates for not only maintaining services, but expanding on them in Prince Rupert.

Those themes have made for frequent items that we have explored on the blog over the last few years.

You can dig deep into those notes from our archive pages here.