With New Federal cabinet, there are new faces in some key areas of note for the Northwest


Prime Minister Justin Trudeau introduced his new cabinet following his return to office, albeit as part of a Minority government Parliament, a somewhat challenging stream ahead which will make for some interesting navigation from the Liberals in order to keep hold of power.

The new cabinet is larger than that which last held positions prior to the election call, with a number of new portfolios created by the Prime Minister to address some of the files that have captured the Liberals attention following the election results and continue to reinforce their themes of a progressive government.

Among the more intriguing creations, was the introduction of the Ministry of Middle Class Prosperity, which comes perilously close to sounding like something created by the Monty Python troupe of years ago.

Still, it does indicate where the Liberals probably believe their path towards a return to a majority position lays, with a focus on building the economy, creating jobs and addressing the Liberal positioning statement of "continuing to move forward".

The Prime Minister's introduction of the Class of Fall 2019 can be reviewed here.

For the Northwest, there are a few new faces in portfolios of some importance to the region.

For the Fishery, local union reps and interested municipal officials will have a new name to track in Ottawa, as MP Bernadette Jordan takes on duties as Minister of Fisheries, Oceans and the Canadian Coast Guard.

She takes over the post from Jonathan Wilkinson, who to the best of our knowledge never actually visited the North Coast to explore fisheries issues during his tenure.

Ms. Jordan may at least have some familiarity with fisheries issues, representing the Nova Scotia riding of South Shore-St. Margarets

Hopefully, NDP Skeena-BulkleyValley MP Taylor Bachrach can touch base with the Liberal minister to impress upon her the dire condition of the North Coast fishery and the need for a hands on visit to the region sooner, than later. 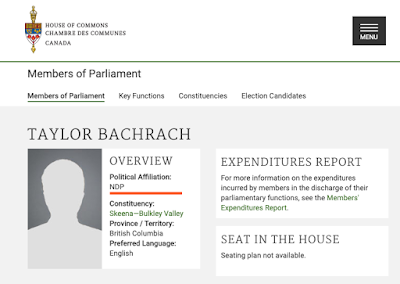 Mr. Wilkinson however, may yet get a chance to visit this corner of the province, as he takes on duties as the new Minister of Environment and Climate Change, a portfolio which will make him an important participant on discussions of future development and any impact on the environment.

With infrastructure always at the top of the mind for municipal and First Nations officials across the Northwest, the new letterhead from correspondences will come from the office of Minister Catherine McKenna.

She has been shifted from flashpoint ministry of the Environment and will now be the Liberal government's point person on Infrastructure and Communities, a position which will provide for an opportunity to deliver funding for many large initiatives.

Concerns over employment issues will now be the domain of Carla Qulatrough, with the Delta MP taking on the duties of Minister of Employment, Workforce development and Disability inclusion.

With the Northwest finding old industries in decline and new one's arriving, that office may have some significant files to study from the region.

For Indigenous communities, a familiar face will be in charge of Crown-Indigenous relations, with Minister Carolyn Bennett returning to that portfolio, while Minister Marc Miller will be handling the work of Minister of Indigenous services.

With the Liberals shut out in Saskatchewan and Alberta on election day, the new cabinet puts a heavy emphasis on membership from Ontario and Quebec, with 28 of the 36 member cabinet coming from those two provinces.

British Columbia has four representatives at the cabinet table as Parliament prepares to resume, with Carla Qualtrough, Harjit Sajjan, Jonathan Wilkinson and Joyce Murray set to deliver the Pacific coast view for the Prime Minister.

The Prime Minister shared the news of his new appointments through social media on Wednesday.

You can view some short biography notes on the new cabinet ministers here.

A wider overview of how the national media viewed yesterdays Cabinet roll out can be found from our political portal D'Arcy McGee.

For further notes on the work of Parliament and updates on Skeena-Bulkley Valley MP Taylor Bachrach see our archive here.
Posted by . at 10:21 AM