The buckets drop for keeps next week as the Senior Boys Basketball program at Charles Hays Secondary looks to defend its AA Championship status.

Mel and Ryan Bishop have been putting the season's plan together through the fall as newcomers joined the roster and returning players gained new roles in some cases, that after a turnover of personnel with graduation time of last Spring.

Among the departures, Liam McChesney, who has begun his NCAA journey with Utah State, and Eric Lees, who has joined the roster of the Camosun Chargers down in Victoria.

You can follow the path of some of the CHSS grads in a range of sports from our archive page here.

As for 2019-20 the practice sessions come to an end on November 29th when the Maker's make the trip to Terrace and a  two days of competition at the Caledonia ice breaker tourney for 2019-20.

The team then hits the road in the first week of December as they make a return appearance at the North Shore Tournament in North Vancouver.

Mid December finds the team hosting their own tournament at the Charles Hays Gymnasium.

The New Year brings the first of two Lower Mainland teams up to the North Coast as the Rainmakers tip off with  Pitt Meadows on January 3 and 4.

One week later, the Charles Hays team hits the road to Prince George and tournament at Northern BC's largest city.

January 17 and 18 will bring the second southern team to the North, with Brookswood here for games at CHSS.

A return home at the end of the month will find Prince George Secondary having travelled to town for two days of basketball from January 31 to February 1.

One week later, the Rainmaker will welcome Prince George's DP Todd to town in what will be the final bit of action until zones.

That regional showcase comes up  February 21 and 22, with tournament action taking place at the Charles Hays gym, with the winner punching their ticket to the Provincials in Langley. 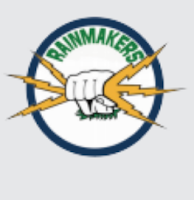 As they look ahead to the start of the season, their championship status has served them well in the Pre Season polling, with the first release of the 2019-2020  season placing the Rainmakers Second overall in British Columbia. 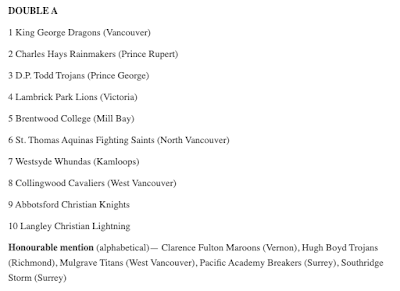 A good look ahead to the entire spectrum of High School Basketball in BC can be found from the Varsity Letters website here.

It's still a bit of a work in progress, but for more notes on the Rainmakers through the season check back often with our archive page here.
Posted by . at 12:05 PM

Email ThisBlogThis!Share to TwitterShare to FacebookShare to Pinterest
Labels: Senior Boys Rainmakers hit the court for keeps Next week in Terrace