Some climbing to do in the standings, as Prince Rupert Rampage return to the ice this weekend 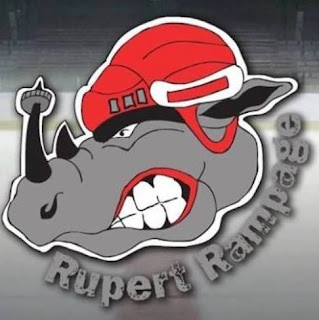 It's been over thirty one days and counting since the Prince Rupert Rampage have fired a shot towards an opposing goal in CIHL play, and as their one month plus hiatus from action comes to an end, the Rhinos have a bit of standings climbing to do, should they have designs on a First Place finish.

The Rampage  last played a regular season game on October 26th  with a win over Smithers, with a quirk in the CIHL scheduling giving them some significant down time, while their league partners travelled to and fro across the Northwest and into the Cariboo.

They will look to shake off the rust this Saturday Night at the Jim as the Kitimat Ice Demons come to town, with the Rampage looking to return to the hot start to the year that earned them a 5-1 record prior to their one month plus vacay.

Despite that lengthy time off the ice, the Rhinos are still well within striking distance of the league leading Terrace River Kings, who top the CIHL standings with a perfect 8-0 record boasting of sixteen points, six ahead of the Rampage who currently have two games in hand .

The Ice Demons come to town Saturday with a much improved record from years past, currently hosting a 2-5-1 record, this years version of the Kitimat squad is a much stronger one and makes for a tough night at the rink for those they take on.

They may be in a bit of snarling mood as well, having dropped a tough contest last weekend against the expansion Hazelton Wolverines, in what reads like a nasty night at the rink.

Puck Drop this Saturday night at the Jim is 7PM

For more items of note on the CIHL see our archived page here.

Email ThisBlogThis!Share to TwitterShare to FacebookShare to Pinterest
Labels: Ramapge vacation almost over